Youth care for livestock projects in rain, snow, and shine 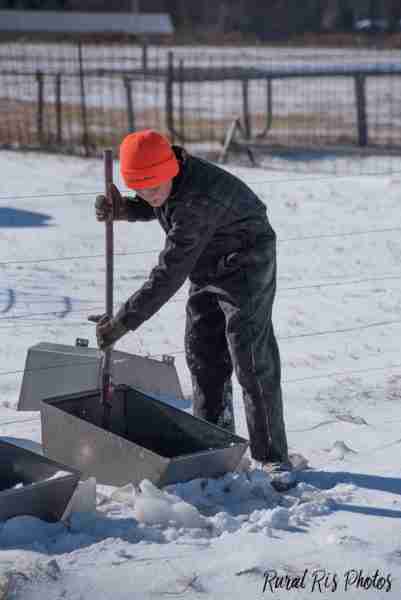 Following is a guest post from Marisa Linton. Marisa grew up showing and raising livestock, and currently lives on her family’s small farm in Mount Olive. She has shown animals at the N.C. State Fair for 14 years and is a past youth livestock scholarship recipient. She is an N.C. State University graduate, agricultural photographer and blogger.

The beginning of the year brought snow with it to North Carolina. There were many excited kids playing in the snow and relishing the delay and cancellation of school. In many parts of the state, children were making snow cream, attempting to build a snowman, and sledding. It isn’t all play for some kids, though. Those who own livestock have a few additional snow activities in their schedule.

While many youth sold their animals at the N.C. State Fair, spring shows are right around the corner, and youth are preparing a new set of animals for these shows. Because of the time of year, caring for livestock looks a little different than it does leading up to the state fair. During the summer and fall, youth often keep fans on their stock and frequently check water to make sure the water is nice and cool. The winter months mean heat lamps, dry bedding and breaking ice in the water. Regardless of the time of year, the livestock are cared for.

Showing livestock isn’t quite like a traditional sport. Sure, in both showing and a more traditional sport, if you don’t practice, you won’t be very good. However, with many sports, you could technically ignore it for days on end. You can’t ignore the pigs, goats, sheep, poultry or cattle. First, the animals are way too loud to not notice and second, they rely on their showman to take care of them. Youth work hard every single day to care for their animals in the best way possible.

It isn’t always fun, but it is part of the deal. Take my little brothers, for example: they were breaking ice three inches thick with an axe. They also had to haul buckets of water by hand (hoses don’t work well in ice). They did this twice a day in addition to giving hay, feeding, making sure bedding was dry, and ensuring heat lamps worked.

“I don’t mind it. I can wrap up. I like breaking the ice,” says Gideon Linton,  age 11. “They can’t get food by themselves, and you have to check to make sure they are warm and healthy.”

For my brothers who are all boy, breaking ice is the fun part. Hauling water buckets and pitching hay…not so much.

“The hay is the hardest part. It gets everywhere—my shirt, my pants….it’s itchy, but they are just like humans and need something to eat,” says Gideon’s brother, Isaac, age 13.

My brothers are not alone.  Hundreds of youth from across the state brave the elements to take care of their stock every single day. It doesn’t matter if there’s rain, snow, sunshine, or, in North Carolina’s case, all three in one week.

Of course, dressing the part is important. Cold means insulated coveralls, toboggans, gloves and boots. Hot weather varies, but typically still involves boots. Livestock feeding clothes aren’t always the most glamorous, but they do the job. Case in point, the following photo. 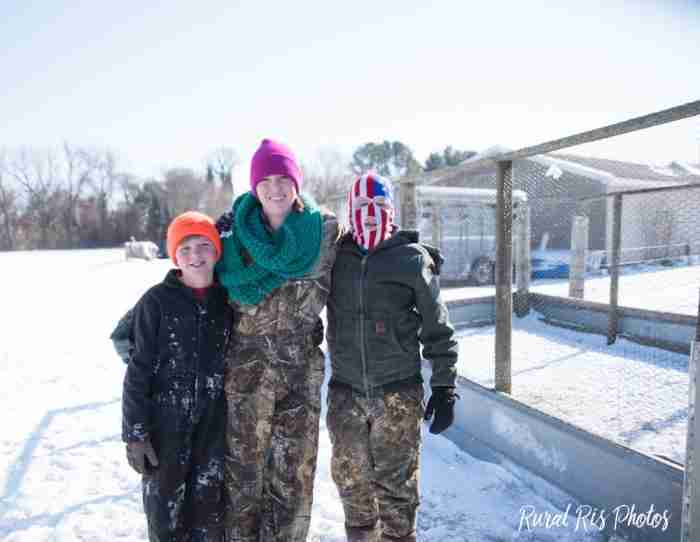 There is certainly no rest for the stock show kid. On a snow day, you can find them sledding, building a snowman or throwing snowballs—after feeding and thawing out in the house first, that is.