Home Yeah! No home games during the Fair!

Yeah! No home games during the Fair! 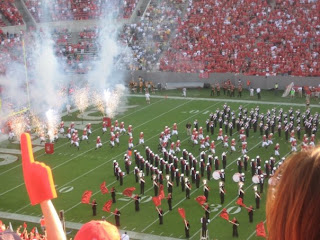 If you were in Raleigh yesterday, you probably heard a collective sigh of relief coming from the State Fairgrounds, traveling in a wave all along Hillsborough Street and the N.C. State University campus, all the way downtown to the Agriculture Building when the Wolfpack football schedule was released.

Not only does the Wolfpack mark their season opener on ESPN in a Thursday night matchup against the South Carolina Gamecocks, there will be NO home football games at Carter Finley Stadium during the N.C. State Fair! This makes everyone very happy.

Usually, the State Fairgrounds, Carter Finley Stadium and RBC Center are helpful neighbors, eager to share parking lots to accommodate the tens of thousands of people who come to enjoy the entertainment venues along this corridor. But when the Fair rolls into town and becomes a mini-city AND a football game is held at home and Carter Finley also becomes a mini-city, well, you end up with L.A.-type traffic jams and lots of upset customers on both sides of Trinity Road. So I think it’s safe to say that Wolfpack fans and N.C. State Fairgoers alike are happy that the ACC was able to work out a schedule that keeps Carter Finley dark for two weeks.

The Master Plan addresses the parking situation with 5,000 more parking spaces, but as of right now, we don’t have a timetable for those projects. This is the best scenario we can think of.

So from the State Fair Press Office to ACC Commissioner John Swofford, we’d like to say thank you for making our lives a little easier by not scheduling a home football game during the 2009 State Fair. (And can I go ahead and give you a heads-up on the 2010 Fair? It will be held at the State Fairgrounds on Oct. 14-24, 2010.)