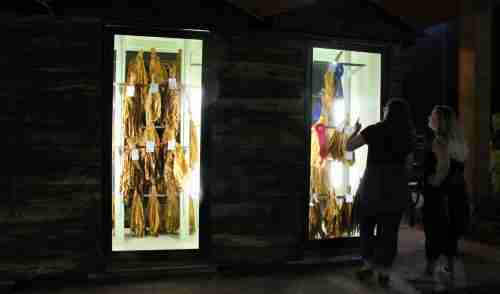 Winning hands of tobacco are on display in Heritage Circle at the Tobacco Pavilion throughout the State Fair.

Tobacco is a tradition in North Carolina, and you will find plenty of examples of this cash crop on display at the State Fair.

At 2 p.m. Friday, Oct. 13, teams of three will compete in the annual tobacco stringing contest for bragging rights and cash prizes. All that tobacco plus many more sticks will fill the antique tobacco barn, where the leaves will be cured by heat during the week. On Friday, Oct. 20, there will be a mock auction simulating the old way of buying and selling stacks of tobacco bundled onto burlap sheets.

You can also find winning hands of tobacco on display in cases in the Tobacco Pavilion.

Edward Newton of Henderson was the Commissioner’s Award winner in the Heritage Tobacco Harvest Competition, denoting the best of all the first-place-winning hand-tied tobacco entries. 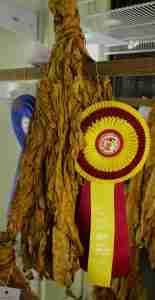 Other first-place winners were Robert Dickerson of Oxford for lugs, Clay Strickland of Salemburg for cutters and leaves, and J.G. and George Clayton of Oxford for their organic tobacco.