Raleigh’s come a long way since the Raleigh IceCaps played “ice hockey” in Dorton Arena. This weekend the city plays host to the the NHL All-Star festivities. Our neighbor, the RBC Center, will host the games and downtown Raleigh is where all the off-ice activities will take place. We hear that our old friend, Lord Stanley’s Cup will be back in town and we hope to say hi. (Nope, we’re not afraid to name-drop!) You see, we got up-close-and-personal with Lord Stanley after the Hurricanes won the coveted trophy in 2006. 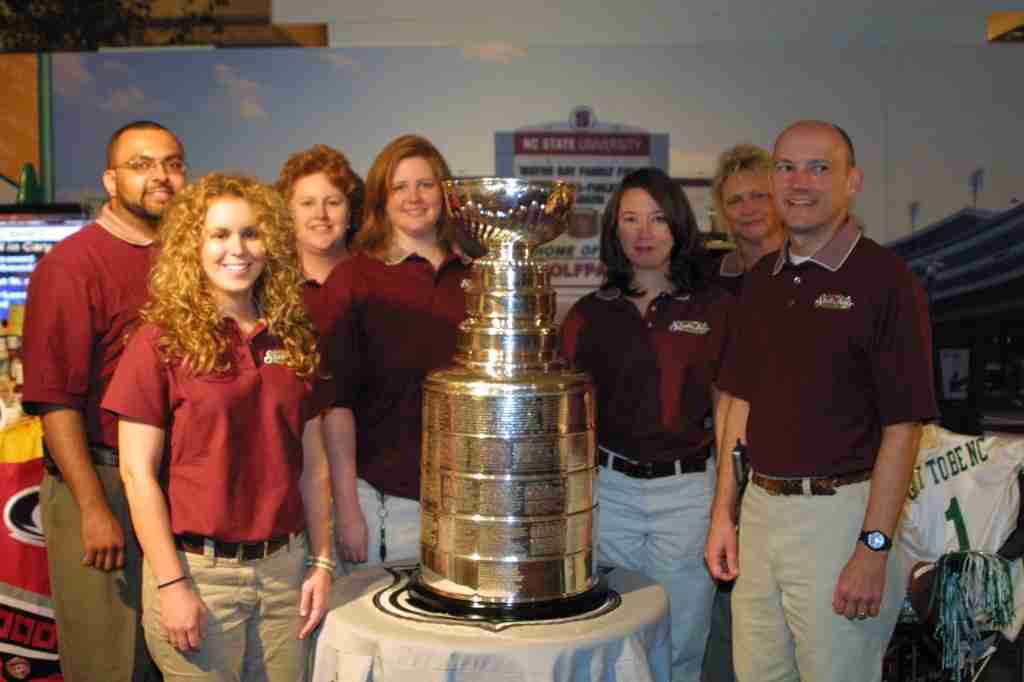 The 2006 Press Office with the Stanley Cup

On opening day in 2006, the Stanley Cup made a visit to the N.C. State Fair on behalf of the reigning champions. It was North Carolina’s first professional sports title, so it was fitting that the trophy made a visit to the Fair to be gawked at by thousands of North Carolinians. After all, if you’re going to gawk at a sports trophy, this is definitely the one to do it with.

When the trophy first arrived on the grounds, State Fair folks got a chance to have pictures taken with it. The Press Office departed from tradition of taking our annual office photo on the last day, and instead opted to take our picture on the first day – with “The Cup.”  (Yep, we’re on a one-name basis now.)

After the requisite photo ops, Commissioner Troxler and the trophy handler took Lord Stanley on a few tours of the Fairgrounds. First, they toured from the high vantage point of the Big Cart. (How they got the Cup up there without dropping it is a bit of a miracle.) Then they took a ride on a golf cart to the Ferris wheel. From there, they could easily see the RBC Center, site of the big win.

Afterwards, Lord Stanley’s Cup hung out in the Got to Be NC tent for a few hours to be admired by the long line of folks who dropped by to see it. Even though it is Canadian by birth, we quickly accepted it as a true North Carolinian, like our favorite Canes players. 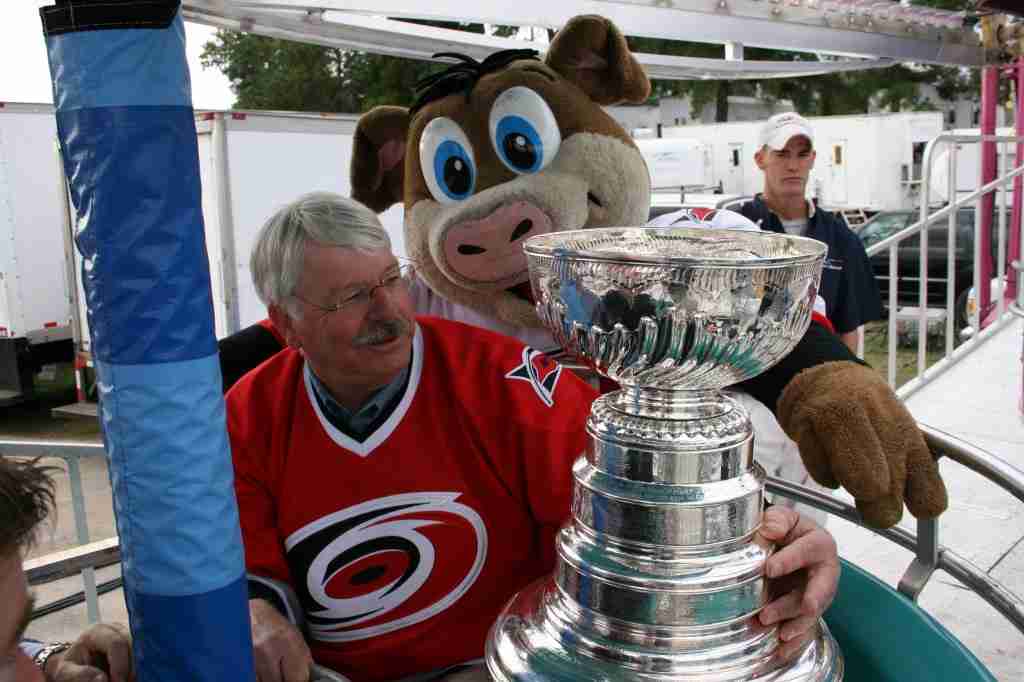 Stormy checks to be sure Lord Stanley's Cup is securely fastened in the Ferris wheel before going for a ride with Commissioner Troxler.

We’re excited to be located so near to where the hockey greats will be this weekend. And we wish our Canes All-Stars the best of luck – Eric Staal, Cam Ward and Jeff Skinner. And good luck to Jamie McBain, who will be participating as a rookie in the SuperSkills Competition. Let’s Go Canes!

If you’re gonna make your way to the RBC Center this weekend, stop by the fairgrounds and check out the flea market or the Fly Fishing Expo on Saturday and Sunday. On Saturday, you can also watch a cheer and dance competition or celebrate the Chinese New Year. For more information, check out the calendar of events. The weather’s gonna be great to welcome thousands of NHL fans to our great state.