There’s a New Boss at the Fairgrounds 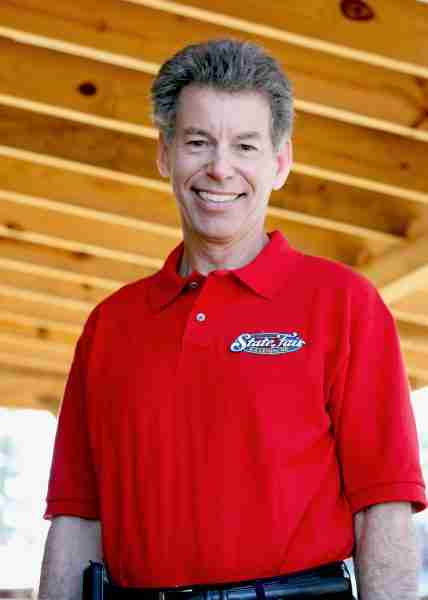 Kent Yelverton, newly appointed manager of the North Carolina State Fair, is no stranger to the fairgounds.

It’s been a little more than a month since Kent Yelverton was named manager of the N.C. State Fair and we think that’s just the right amount of time to get acclimated to the fairgrounds frenzy.  While the State Fair is just 11 days of the year, the fairgrounds is a year-round operation, renting buildings and space for events 364 days a year. It’s a busy place. Read below to find out how Kent is transitioning into his new role and learn a little bit about the new boss at the fairgrounds.

Kent was born and raised in Wayne County where he grew up on his family’s farm in Fremont. He now lives there in his old homeplace. Kent graduated from North Carolina State University in 1986 with a bachelor of science in civil engineering. Upon graduation, he stayed in Raleigh and accepted an offer to work with a private engineering firm in the area. Four years after graduation, he sat for the North Carolina Professional Engineer exam and has maintained his license ever since.

In 1992, Kent joined the N.C. Department of Agriculture & Consumer Services as a consulting engineer in the markets division, focusing on capital improvement projects involving farmers markets and ag centers across the state. In 1994, he was promoted to facility agricultural engineer and to engineering director in 1999. When the Property & Construction division was formed in 2001 to provide construction and real estate services to the NCDA&CS, Kent was named the first director of the new division and served in this role until his move to the fairgrounds last month.

“The first month on the new job has been great,” Kent said. “There has been a tremendous show of support from fair staff, the department and those who do business with the fairgrounds. I’m looking forward to carrying on the great traditions of the fairgrounds while continuing to grow and expand the fair and year-round programs.”

With a strong engineering background, it’s no surprise Kent is excited about the new pedestrian tunnel under Trinity Road that will connect the fairgrounds and Carter-Finley stadium. The North Carolina Department of Transportation began construction earlier this month on the tunnel that will cause significant changes to the north side of the fairgrounds and will shift how pedestrians access the grounds from Carter-Finley. “The tunnel will be completed in time for the 2018 fair and we need to be ready,” he said. The new tunnel and its subsequent changes to the north side of the grounds will cause the fairgrounds to look completely different in the coming years and although Kent is no longer in an engineering position, there will be a lot of projects where his engineering background will be useful.

Throughout the years, Kent worked closely with predecessor Wesley Wyatt to carry out his ideas and visions for the fairgrounds. The most notable is the new midway, a concept that was completely Wesley’s idea. Additional projects Kent has been involved with over the years include: the planning and construction of the Exposition Center and Martin Building, improvements to the water/sewer/electrical systems, reconfiguration of Heritage Circle and many repair and renovation projects to keep existing facilities in working condition to support fairgrounds activities—all proving he is no stranger to the fairgrounds.

As for his favorite part of the fair, he says, “that’s an easy answer! Walking the grounds during the state fair while wearing a staff badge and shirt and being an ambassador for the fair. I love being able to help a family find the exhibit or entertainment act they are looking for and stopping to ask a young child what their favorite part of their visit was and seeing their face light up makes all the long, crazy hours worth it.”

I'm Tyson, but here you can call me Sweet Corn. Growing up, some of my favorite memories include visiting the N.C. State Fair every year with my family. In 2015, I joined the staff as a Marketing & Promotions Assistant for the fairgrounds. Five years later, life led me down a different career path. Now, I live on the coast of North Carolina, but return to Raleigh each October to take in the sights and sounds of the North Carolina State Fair. If you're looking, you'll find me in Heritage Circle with a cob of roasted sweet corn in one hand and a frozen apple cider in the other!
View all posts by Sweet Corn →