The questions keep coming at the fair information booths 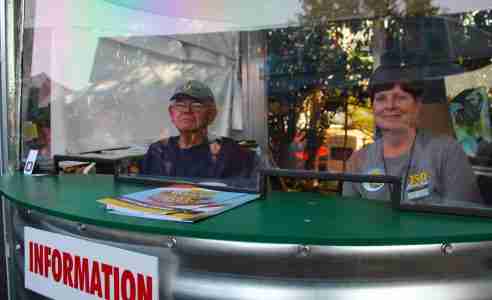 Boone would also add to the list, “Where’s the gate that I came in?”

The two pass out a lot of daily schedules with maps, and offer directions to the pig races, specific food booths, different gates, buildings, and did I mention the pigs races.  They also pass out stickers for parents to write their contact information on in case their child becomes lost.

Brown and Boone enjoy talking with people and helping them find what they are looking for. Being in a booth that is fashioned out of a modified Sukup grain bin, gives them a birds-eye view of people passing in front of the window. It’s a good view, but admittedly limited, except when they get out to walk around to take a break or get a meal.

Brown works from 8:30 a.m. to 7:30 p.m. when traffic slows in their area and the booth shuts down. Boone works from 11 a.m. to 10 p.m., shifting from the Gate 9 information booth to the booth on the North side of Dorton Arena.

Boone, a retired teacher, may be a newbie in the information booth, but she has a lifelong love affair with the fair. Having attended for many years, she knows her way around the fairgrounds and uses recognizable buildings and signage to help direct people to where they are going.

“When we can direct them to where they want to go, we could have helped save them an hour of walking around,” Boone said.

Brown’s wife works at another information booth and he got started a few years ago when organizers were looking for more people willing to work. “I thought I’d give it a try,” he said.

Boone favorite things at the fair are the exhibits, the animals and the food. Brown’s favorites are Heritage Village, the blacksmith shop and the greenhouses at the Flower Show.

“The best question we get here is ‘Where is Gate 9?’ Boone said. “We tell them right there and its the best answer ever.”