The “glamorous” side of PR 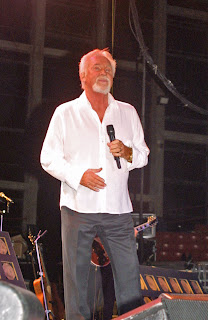 One of the most interesting things about working with the State Fair is the unusual requests we sometimes have the chance to “assist” with. During my 12 years with the Fair, there have been both fun and “interesting” opportunities.
I’m usually game for the more off-the-wall requests because I always think they make for great stories. So whenever I get the call that starts with, “I need a favor …,” I prepare myself.
My Top Five “opportunities” in order of occurrence are:
1. Taking country music singer Pam Tillis and one of her band mates antique shopping around Raleigh. We hit a couple of shops that day and the ladies seemed to have a good time looking for treasures. We hit the Carolina Antique Mall at Cameron Village and even ate lunch at the Carolina Café there. I was only asked once (in a whispered/hushed tone), “Is that Pam Tillis?” Mostly we were able to tool about town without creating a stir.

2. Ironing Kenny Rogers’ outfit. This one sounds more glamorous than it was. I actually ironed numerous pieces of clothing, so I wasn’t sure which outfit he was going to wear that night at the concert. In the end, he chose a simple white shirt and black pants. I guess the rest of the clothes went back in the travel case to gather more wrinkles.

3. Transporting the Carolina Panthers’ mascot, Sir Purr, on a golf cart through the grounds to the Sam Rand Grandstand on a Saturday night. Sir Purr was making a special appearance at the Keith King BMX Bike Stunt Show, and he generated a lot of attention as we rode through the crowd to the front entrance of the Grandstand. It was priceless watching the expressions on people’s faces when they realized a “giant Cat” had prowled up behind them. I found out that Sir Purr has a whole lot of fans.

4. Another personality with lots of fans is former WRAL Trafficologist Mark Roberts. Mark and cameraman Chad Flowers were working on a story about one of the horse show competitions and I drove them and all their gear over to the Hunt Horse Complex. Everywhere we went, people would want to stop and talk to Mark Roberts.

5. Filling the giant balloons that flew above the ticket redemption areas in 2007 with helium. Some of you may remember seeing the red and white striped balloons shaped like hot-air balloons hovering near the main Midway and near Dorton Arena. Suffice it to say, these aren’t small-sized balloons. They each measured 9 ½ feet tall and the two took almost two full 5-ft. tall helium tanks to fill. The most interesting part of the experience is that I had never even used a small portable, buy-at-the-store helium tank to fill balloons for birthday parties or special events. Nor had my co-worker, Firecracker. Attaching the balloon to a suitable base presented more challenges, but with the assistance of Cid, one of the super nice State Fair employees, the balloon was attached and ready for release. I remember the anxious feeling I had as I watched the first balloon slowly drift higher and higher in the air until it reached the end of its line. As it stopped and the line pulled taut, I just kept hoping it wasn’t going to come loose. I checked on it several times that day, but it was always there bobbing back and forth in the breeze. Each morning when I arrived on the grounds, the first two things I looked for was those balloons.