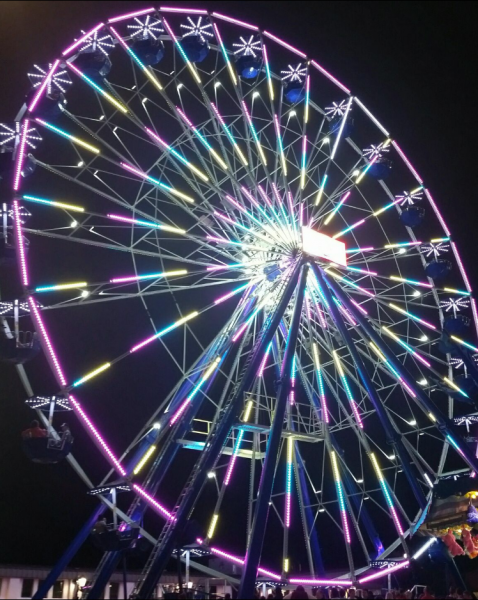 If you had a chance to go to the N.C. State Fair last year, chances are you took a ride on the Giant Parthenon Wheel. According to Mark Janus of Powers Great American Midways, the wheel was the most-ridden ride at the 2016 N.C. State Fair.

It returns this year with more LED lights that will make it stand out even more in Kiddieland and features a new LED screen showcasing photos from the fair.

“Last year, at 108 feet tall, this was the tallest ride at the fair,” said Janus. “This year, we have set up a new spectacular ride on the main midway called the Air Raid; that one is actually 118 feet off the ground.”

The Giant Parthenon Wheel arrives to the fairgrounds on four semi trailers. The 123,500-pound ride takes 10 workers about 18 hours to set up for the fair. It takes five or more workers to run the ride. “A computer tells us which seats to load,” Janus said. “The computer also helps make sure that everyone has the same amount of ride time.”

Janus offers the following tip to selfie seekers: “The best way to get a picture of yourself and the ride is to stand back as far as you can go. And get more wheel in the background.

Powers Great American Midways plays about 30 events a year. During the off-season, Janus attends conventions, including the International Association of Fairs and Expos in Las Vegas and the International Association of Amusements Parks and Attractions in Orlando, Fla. This time is spent ordering equipment, attending seminars and getting up to speed on new stuff in the industry. Twenty people work for Powers full time at the company’s facility in Chadbourne. Their jobs include refurbishing, painting and welding. 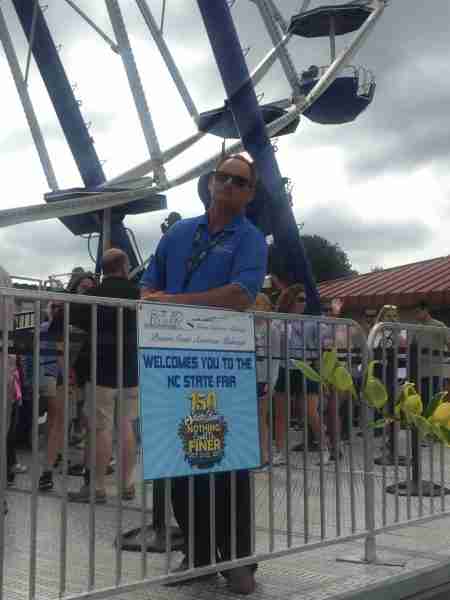 Also new at this year’s fair is wristbands everyday. Wristbands can be purchased online or at the fair for $35. “It’s a heck of a bargain,” said Janus. “Where else can you go and ride 100 rides, granted you meet the height requirements, for $35, or $25 if you purchased wristbands in advance?”