It was about this time last year when I started looking for a 2010 summer internship. At the time I was studying abroad in London and had been 4,000 miles away from North Carolina for about four months. I had mastered the London Underground, had eaten plates piled high with beans and toast and drunk kettles (literally) of hot tea and milk. Although it all sounds pretty fabulous now (except for the beans), I was definitely homesick.

When I stumbled across the 65 internships offered by the Youth Advocacy and Involvement Office through the North Carolina State Government Internship Program, I knew there was no other place I would like to intern more than my home sweet home in the Tar Heel state.

Among those 65 internships, one especially caught my eye—State Fair Public Relations Intern. As a student studying journalism and public relations, the thought of promoting one of North Carolina’s largest (and most fun) events through traditional and social media definitely excited me. Not to mention, the thought of the Ferris wheel, the poultry tent and deep-fried pickles was enough to make me hop on a plane back to RDU instantaneously.

Now, after interning with the NCDA&CS during the summer and through the N.C. State Fair, I can officially say that it has been one of the best internship experiences one could ever have. I have had the opportunity to compile the Newspapers in Education supplement for The News and Observer; conduct the N.C. State Fair high school advertising campaign and write press releases, blog posts and speeches. Sometime in between writing about peach and muscadine season, interviewing blue-ribbon chefs and announcing the 2010 State Fair concert lineup, I realized that internships don’t get much better. 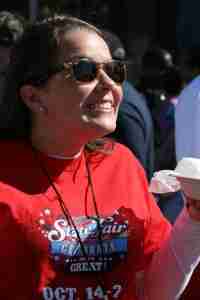 Here I am, caught in the act of celebrating what's great: a wrap from Neomonde Bakery

So now the time has come for me to thank Flying Bob, Merrie Go Round, Firecracker, Bearded Lady and Blue Ribbon for showing me around the Fair VIP-style and for teaching me the ins and outs of working in a public affairs office. It has been absolutely wonderful and you can all bet that I’ll be roaming around the fairgrounds sometime during Oct. 13-23 of next year!