A few weeks ago, several N.C. State Fair staffers attended the International Association of Fairs & Expos Annual Convention in Las Vegas. The convention was an educational networking event where we met with our counterparts from fairs all over the world to share ideas and resources.

There were numerous workshops and roundtable discussions, and we participated in topics on everything from emergency preparedness and guest hospitality to fair-food concessions and unique ideas for agricultural competitions. In the trade show, vendors and entertainers demonstrated their products, and we kept an eye out for some new features to bring to the 2012 State Fair (more on that later). 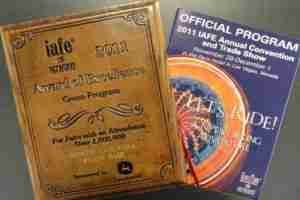 While there, we also snagged a few awards! In the agricultural awards division, we won first place for best video for Bearded Lady’s 2010 fan-selected Press Office challenge to milk a cow. We also tied for first place in the “Green Program” category for our 2010 Farm Animal Frenzy Competition. (In case you’re wondering, our fair takes place after the awards submission deadline, so in many categories we submit entries from the previous year’s fair.) In the printed material category of the agricultural division, we took third place for the 2011 County Fair brochure created by NCDA&CS graphic designer Amanda Morris. And our 2011 “Love A Fair” billboard received second place honors in the communications division.

A couple of other N.C. fairs took home awards this year as well, including the Cabarrus County Fair in Concord and the Dixie Classic Fair in Winston-Salem. Congratulations to them.

It’s always nice to be recognized for your efforts. Now that the N.C. State Fair has topped 1 million attendees for two years in a row, we are competing for awards against some of the biggest and best fairs in the industry. So, thanks again to all those who supported the fair this year!