Home 2010 N.C. State Fair Roaming acts are up, down and all around

Roaming acts are up, down and all around 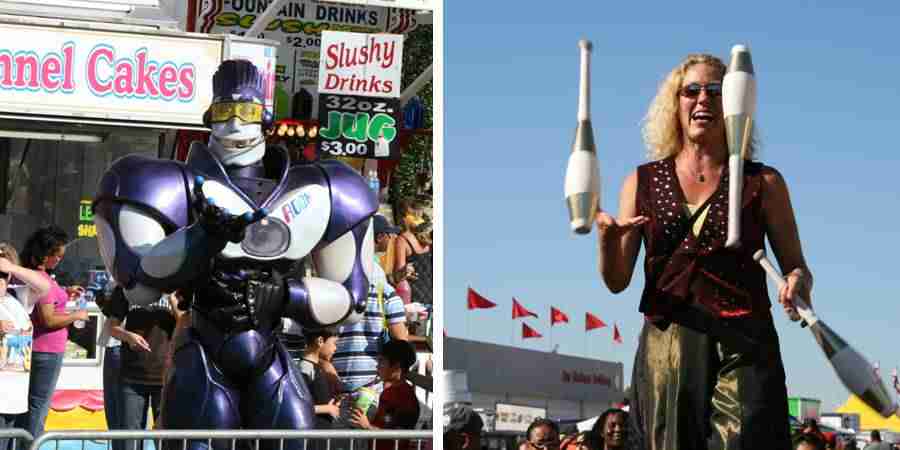 Rock-It the Robot and Carrie McQueen perform at the N.C. State Fair.

You never know where you will find one of the many free roaming acts at the Fair. These world-class entertainers can be found high among the trees, scooting along the grounds and everywhere in between.

For starters, look up to the sky. You might see our resident stilt walker, Carrie McQueen, juggling through the crowd on her extended legs. She’s back this year with all of her eccentric costumes. Rock-It the Robot, towering at 9 feet tall, won’t be hard to find either. If you have trouble, listen for the music  and the crowd dancing to the beat around him.

There are plenty of acts on ground level, too. Look for the fluffy creatures known as the Mobile Robotsbehind the wheels of their miniature tractors, talking up a storm with children and adults in Kiddieland. Also, be on the lookout for a custom-painted, pink pedal car. That’s a sure sign you’ve found Al the Artist, who will be drawing caricatures of fairgoers caught having too much fun at the Fair.

You won’t want to miss the musical parade of Washboard Willy and Wishboard Wanda, the quiet elegance of Statue Viva or the balloon creations of Hubba Bubba the Clown You can find out more information about all the free grounds acts at our website, and if you haven’t already done so, purchase your tickets to take advantage of extra savings.

Next week, we’ll feature the acts that will perform on the North Side of Dorton Arean and in front of the Expo Center. In the future, we’ll bring you more on our Waterfall Stage and Bluegrass Stage performers.