Home Remebering Sept. 11 and saluting the Men and Women in the armed forces

Remebering Sept. 11 and saluting the Men and Women in the armed forces

Surely, all of us who were born before 1990 remember that beautiful September morning in 2001 when the world seemed to stop. In Raleigh, it was a gorgeous day and we were busy with getting ready for the upcoming fair when a co-worker (Merri-Go-Round) came into the office and said that a plane had struck a building in New York. My first thought was nothing like the horrrible reality that it was. For the rest of the day, we kept up with the news on a small, 6-inch, black and white television, and watched out our windows as workers scurried to pick up trash cans around downtown and barricade the Capitol Building and the Legislative Buildings against any further possible attacks. To this day, I will never forget the sacrifices made by the men and women of the NYPD/NYFD as they did their jobs without thought or consequence of their own safety and will keep the families of the innocent victims in New York, Pennsylvania and Washington, D.C. in my prayers.

In 2001, at the Mountain State Fair in Asheville, our colleagues had to decide if it would be better to stay open or close that day. They decided to remain open for families to be able to get away from their television sets and the horrors that they held. Also, by opening, they took a stand against what the terrorists were trying to accomplish by making us hide in fear. I think they made the right choice.

Life in America has never been the same. But at the same time, I’ve never felt safer, thanks to the men and women in our Armed Forces who are fighting for our freedom, both home and abroad. I am the proud sister of a United States Marine, and am proud of all the men and women who wear our country’s uniform and fight for our liberty — a job that I was unwilling to take. I believe we are truly lucky to be Americans.

The N.C. State Fair will honor the men and women in uniform and their families on Military Appreciation Day, Wednesday, Oct. 22. Active duty, reserve and National Guard service members or spouses with valid military ID will be admitted free along with four guests. There will be military displays and concerts from groups representing the different bases across the state. This is also a great chance for fairgoers to thank a person in uniform for the job that they do. Men and women of the U.S. Armed Forces, we salute you! 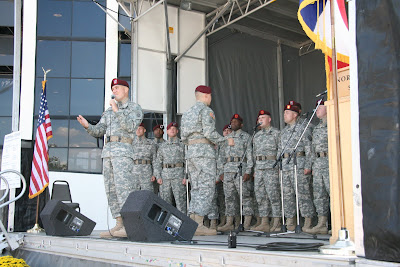 BTW, If you’re in the mountains, there will be a 9/11 tribute tonight at the Mountain State Fair, in the Open Corral performed by the Dixie Starlight Express. It’s always a moving performance on horse back, so don’t miss it!