Record-setting giant pumpkin on display at the N.C. State Fair 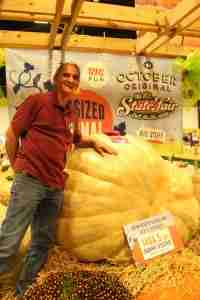 Danny Vester with his state-record giant pumpkin at the Expo Building at the N.C. State Fair.

Within two months, Danny Vester of Spring Hope had set and broke his own state record for giant pumpkins as a first-time grower. Clearly he understands a thing or two about growing these mammoth fruits.

Vester has the 1,404.5-pound pumpkin on display in the Expo Center and was recently there answering fairgoers’ questions. His previous record pumpkin was 1,296 pounds, which was set in September.

When that “smaller” pumpkin was weighed, Vester was happy he set the state record, but  he had his eye on another one in his 5,400-square-foot garden.

“I knew this pumpkin was over 1,200 pounds, and I knew it was growing fast,” Vester said.

The retired telephone company worker bought his pumpkin seed via the Internet from a giant-pumpkin grower in Pennsylvania. The seed came from a 1,744.5-pound pumpkin. The cooler weather up North helps growers produce much larger pumpkins than we grow in the South, he said, but he has been thinking about ways to better manage some of the conditions here that hinder growth.

“Here we have a whole different environment that is not great for growing pumpkins, ” Vester said. “Part of it is figuring out how to work with the environment, and figuring out the unknowns.”

One of the factors he has focused on is getting faster runoff with water to avoid saturating the soil. Vester said he has spent a lot of time trying to figure out better growing techniques. “I’ve got some ideas for next year. I’ll be putting them into action and then see what Mother Nature throws at you. Mother Nature will always shoot you a curve.”

One new idea he plans to incorporate next year is to put wind breaks around his pumpkin patch.

One tip he passes along to would-be growers: “Don’t try to grow a giant pumpkin until you get about 200 leaves on the ground, because every leaf has a root node, so 200 leaves is 200 roots.” But the bigger tip he wanted to share was that anyone with some garden space can grow these plants, too.

Be sure to check out Vester’s record-setting pumpkin in the Expo Center.