Rabbit Hopping Competition jumps into action at the State Fair

Move over horses and K-9s in Flight – there will be some slightly smaller and fluffier creatures also wowing crowds with their agility skills and jumping abilities at the 2015 N.C. State Fair.

This year, the Rabbit Show will hold its first official rabbit hopping competition. The sport involves a course of jumps and other obstacles such as bridges. A rabbit is led through the course by its trainer while attached to a harness.

Rabbit Show Superintendent Kristen Bruce has kept rabbits for many years, but first got involved with rabbit hopping three years ago after hearing about the sport through friends. She said she wanted to bring the rabbit hopping competition to the fair to introduce the sport to more people.

“It’s a very new sport in the U.S.,” Bruce said. “They’ve had it overseas for a long time and it’s gradually become more well-known, especially as videos have popped up online, and it’s becoming a more recognized sport and hobby.”

Rabbit hopping developed in Sweden in the 1970s, where the procedures for the sport were modeled after those in horse jumping. The rules were adapted for rabbits, and the sport began to spread globally, gaining popularity in the United States in the 1980s.

Bruce said there are not many nationally sanctioned rabbit jumping events, and competitions are mostly organized by independent groups and private rabbit owners. However, streamlined national regulations for the sport are currently being developed by the American Hopping Association for Rabbits and Cavies, an organization chartered by the American Rabbit Breeders Association.

Bruce said it was exciting to have the talent at the exhibition. Although rabbit hopping is popular among many 4-H and other youth groups, it is not just a youth sport. She said she hopes the new competition will encourage rabbit owners to get involved with the sport. 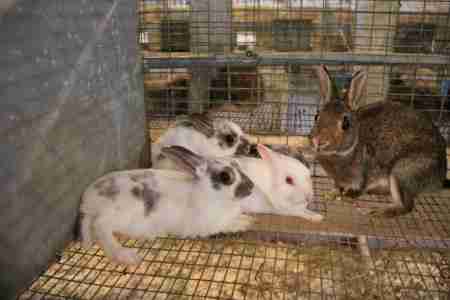 Any rabbit that enjoys jumping can compete in the rabbit hopping competition.

Registration for this year’s rabbit hopping competition is closed, but if you are a rabbit owner and are interested in competing in 2016, it is pretty easy to do.

Points to consider for 2016: The competition is open to anyone with a rabbit, and is free to enter, and is a great show especially for beginners. Competing rabbits start on an easy course, with qualifying rabbits proceeding to more advanced courses. No premiums are paid, so it gives beginners a chance to gain experience, Bruce said.

“This is a sport where the more you do it, the better your rabbit will respond,” she added. 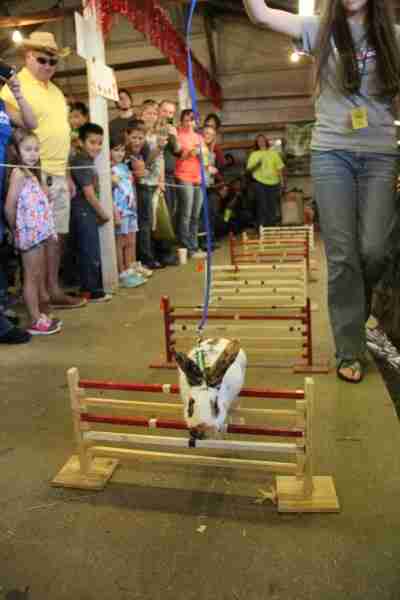 The rabbit hopping exhibition at the 2014 State Fair drew plenty of curious onlookers.

Bruce said that while training rabbits for competition, the focus should always be on the safety and happiness of the rabbit. She said a trainer first needs to have a rabbit that is energetic and naturally wants to hop.

“Some rabbits and breeds are more inclined to jump,” Bruce said. “Every breed can jump but not all of them want to, and you don’t want to force a rabbit into it.”

A rabbit that has to be continuously forced or “cued” over a jump, can be penalized in competition. Just as in horse jumping, judges are looking for a rabbit that completes the course in the best time with the least amount of faults, which can include cues or knocking over jump rails.

In addition to being inclined to hop, Bruce said jumping rabbits must also receive consistent training that is not too intense. She said trainers should work with the rabbits for no longer than 20 minutes for up to two times per day.

“Rabbits get stressed out really easily,” Bruce said. “You can get a rabbit ready to compete in a couple of weeks, but it really depends on the rabbit, your patience and how much time you’re willing to commit.”

In the first week of training, owners should get the beginner rabbit acclimated to the harness and leash. The rabbits then need to practice hopping around in an enclosed area, such as the living room or kitchen floor. Trainers can place rails flat on the ground to get the rabbit used to hopping over a stick. Once the rabbit is used to the leash, training then involves gradually getting the rabbit used to navigating longer routes and hopping over higher rails.

Bruce said that in addition to regular practice at home, rabbits need to be consistently exposed to people and be trained with distraction so that they are prepared to compete in different environments.

“Rabbits are prey animals and so they are anxious by nature,” Bruce said. “A lot of the time, you’ll have a rabbit that jumps great at home but freaks out at a competition. They’ll get performance anxiety being around so many people.”

Bruce said the State Fair Rabbit Show will offer a small viewing area for curious fairgoers, but the course will be roped off to ensure the comfort of the rabbits. She said although rabbit hopping is a competitive exhibit, her focus as superintendent is on educating fairgoers.

“It’s a novelty, I guess,” Bruce said. “A lot of people don’t know that you can show rabbits.”

Bruce currently owns and trains two jumping rabbits and allows her kids to work with the rabbits, too.

“I just do it for fun and for exhibition,” Bruce said. “It’s not about competition. It’s about developing our hobby and getting others excited about it.”