Q&A with Jared, the Subway Guy 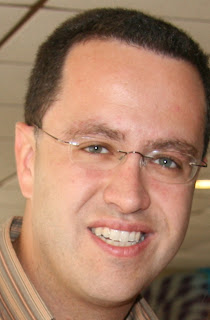 Getting thin made Jared Fogle famous. Fogle was an overweight Indiana University student when he began eating Subway sandwiches and exercising. He lost 245 pounds.

After his story appeared in the campus newspaper, he gained notoriety for his weight loss and became a pitchman for Subway. Since then, he has appeared in commercials and traveled the world talking about the importance of proper diet and exercise. This year, to celebrate the 10th anniversary of “taking it off and keeping it off,” Fogle and Subway launched the Tour de Pants. Afterward, his original pair of size-60 blue jeans will be retired to a museum.

Fogle will be at the State Fair Wednesday, Oct. 22, at 2:30 p.m. to preside at the finals of the Pants Dance Revolution contest on the Kitchen Craft Waterfall Stage. We caught up with him for a quick Q&A.

What’s on your iPod?
I know this will sound crazy, but I don’t even own an iPod. But my favorite music is ’80s!! Love Def Leppard and The Police.

When you’re not out promoting Subway, what do you like to do?
I like to travel even when it’s not with Subway. I really want to go to Italy next.

Your size-60 pants have become an advertising icon. What are your feelings about retiring them after this tour?
I am humbled that a museum would even want them, but even though my originals may be getting retired, I will still have a pair to carry around with me. It’s the best visual aid I could ask for!