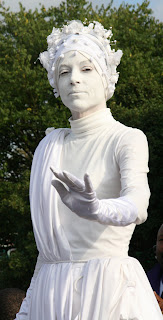 No, an ancient statue from the N.C. Museum of Art didn’t escape and make its way across Blue Ridge Road to the fairgrounds–that’s just Michelle Harrell, creator and performer in the Fair’s Statue Viva entertainment and resident ‘Poddle Mama’ for the new Michelle’s Magical Poodles show. You can find her roaming all around the fairgrounds posing as famous statues from around the world and in the Kiddieland Fun Park everyday during the Fair at 2 and 4 p.m.

How did you first get started?
I was inspired by a Swiss man in Key West, Florida. I saw him create a kind of magic with his performance and I knew I wanted to try this. He encouraged me to continue onto Europe and street perform. I then met my performing partner Bruno Mignard, and we performed together for six years in Europe and the U.S. He had been performing all his life and one of his shows happened to be a Living Statue as well. Bruno returned to Europe about seven years ago and I’ve continued successfully as a solo act. I got a lot of inspiration from him and we’re still friends. He asked me to go have a piece of that sweet potato pie for him this year after finding out I was returning to the NC. State Fair.

What’s your history with the N.C. State Fair?
The N.C. State Fair was the very first fair to take an interest in my then duo act, Les Statues Vivantes. No one in the fair industry had even heard of a couple of living statues such as us. But, the N.C. State Fair took a chance on us and gave us our break. It opened up a huge door for me into the Fair business and I am forever grateful for that.

What can fair visitors expect at your shows?
My now-solo living statue act is called “StatueViva,” which I describe as art coming to life. I think a living statue is a real surprise for fair goers and it catches them off guard. My other show is a classic dog trick show with my four beautiful poodle babies. I like to get the audience involved and invite kids to the stage to participate. People are dog-crazy and I get so many dog fans and lots of dog stories before and after the show. I love that!

Your favorite Fair memory?
During the first N.C. State Fair I ever came to, my then-partner and I were performing in front of the Apex Lions Club booth. They have a guy who sits out front with a microphone and talks about the food. He would especially draw out the description of the sweet potato pie in his great Southern accent and Bruno, being French, had never even heard of the pie. So, after a performance one day, he went into the Apex Lions Club booth, still dressed like a Statue, and asked if he could have some of that sweet potato pie. He was trying to imitate a southern accent which was very funny for a French man and this got a big laugh from everyone in there.

We’re excited about your new Magical Poodles show this year. Do your poodles each have their own personalities?
I first fell in love with poodles when Bruno’s mother had a trick poodle show. The first time I saw all five of her poodles come running out of her house, I was hooked. Finding each poodle was very special and I always like to say that they found me. I’m convinced they were all meant to be performers, like me. Oh, I could go on and on about this subject. They are all so different. Cupid is the clown; Pirouette is the baby (only, not the youngest!); Emilio is the show off; and Blondie, as the only girl, is the boss. I like to play up their personalities with the tricks I choose for them to perform.

What’s your summer schedule like?
I am so thankful to be extremely busy. The doggies and I have already been in New York, Iowa, Wisconsin, and now we’re currently in Virginia. We still have Tennessee and New Mexico to visit, then onto N.C. for most of October. We’re covering lots of ground!

Favorite food at the Fair?
Plain biscuit from the Apex Lions Club.

Favorite/most unique place you’ve performed across the world?
Copenhagen, Denmark is such a beautiful and culturally diverse city.