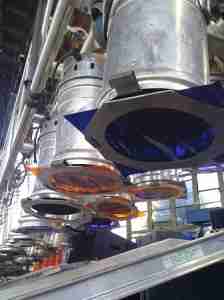 The light rigging waits to be raised into place in Dorton Arena.

The rapidly approaching opening of the N.C. State Fair tomorrow means a lot of final preparations are taking place today.

In Dorton Arena, crews were installing lighting equipment as the building gets ready for 11 nights of concerts. The 2010 concert series kicks off tomorrow with country singer Danny Gokey. (Tickets for the show are $5.)

In the Jim Graham Building, livestock were being checked in for the Junior Livestock Shows. Across the fairgrounds, vendors were putting out their products and gussying up their booths. Inspectors with the state Labor Department were busy inspecting rides to make sure they meet North Carolina’s strict standards for amusement devices. Wake County sheriff’s deputies were inspecting games to make sure they are fair. 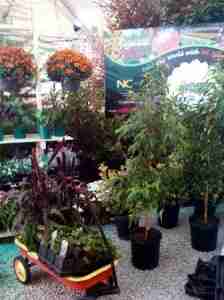 North Carolina's green industry will be featured alongside food products in the Got to Be NC tent.

Workers also were getting exhibits ready to go. The Highway Patrol was placing its helicopter and historical collection of patrol cars outside the Scott Building.

In the Got to Be NC tent, a lot of green is ready for display alongside great food products this year, as the exhibit showcases North Carolina’s nursery, greenhouse and landscaping industries.