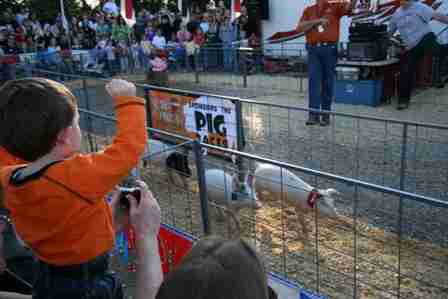 A young fairgoer cheers on his favorite pig.

I’ve been living a sheltered life.

At least that’s what Dennis Cook says. Cook runs the Circle C Racing Pigs on the Hogway Speedway at the N.C. State Fair. At the start of the show, he says people who’ve never seen racing pigs have been sheltered.

Consider me sheltered no more. Tuesday, I saw my first racing-pig show. I’m almost ashamed to admit that I’d never seen one in my five previous years in the State Fair Press Office. After all, it’s one of the most popular attractions at the Fair.

Answering Firecracker’s challenge to do something we’ve never done at the Fair, I went over Monday for the 1 p.m. show. My mistake was going at 12:45. The stands were already full and there wasn’t even standing room.

So Tuesday I was determined to get there early enough to see the show. I found a spot in the stands at 4:20 for the 5 p.m. show. Within minutes I was surrounded by racing fans.

I now know why the stands fill up for every show. Cook got the crowd hyped up for the races, then he asked how many people had never seen pig racing before. (Thankfully, mine wasn’t the only hand that went up.)

Cook then picked audience members to root on the rutters, who honor N.C.’s NASCAR heritage with names such as Piggy Gordon and Squilling Earnhardt Jr. Before each race, a trumpet signaled race time (think Kentucky Derby). Then they were off. The winning pig got a cheese doodle.  The winning audience member got a blue ribbon.

Each race lasted only seconds, but there was plenty of action. Pigs, goats, ducks and potbellied pigs all had their turn on the sawdust oval.

It was fun, and I’m glad I finally took the time to see the races. With four days left at the Fair, I might just head over again.