When you’ve worked at the N.C. State Fair for 17 years, it gets harder to find something you’ve never done. I’ve never entered into any competition, so I’ve never won anything at the fair. That changed today.

Bearded Lady and I tried our hand at the Horseshoe Pitching Competition this morning. The competition is held each Saturday during the fair and you don’t have to pre-register to participate. All you have to do is show up (with your own horseshoes, preferably) and pay the $5 registration fee. Bearded and I wanted to do doubles, but the rules state that we would be paired with an experienced shoer, and we didn’t want to ruin anyone’s chances of actually winning. So we both did the individual competition.

Don’t get me wrong. I have thrown a horseshoe once or twice. But that’s about it. Bearded’s experience level equaled mine. Thankfully, the competition was helpful and friendly and everyone had a good time. We had to cajole a few unsuspecting fairgoers into joining us. Apparently the competition, which was once a bustling event, is now falling on hard times and looking for competitors. In the end, there were two upper-class throwers and four novice throwers – Bearded and I both had a competitor. The upper-class throwers finished their best of three series in less time than it took the novice men to finish one game. There were lots of laughs, a few stray shoes thrown and everyone walked away happy and a winner.

Next year, mark your calendar for Saturdays at 11 a.m. for singles competition and 1 p.m. for doubles. The horseshoe pitches are near Trinity Road outside Gate 9, so you don’t even need a ticket to participate if you just want to come and play. 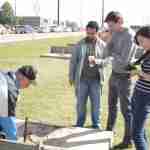 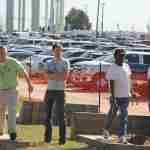 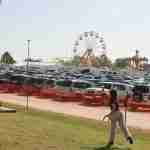 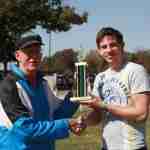 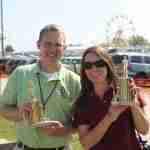 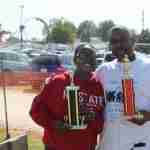