We asked for our readers’ suggestions on what you would like to see us do as a Press Office Challenge, and we had some pretty good suggestions.

One of our selections was Debbie Quinn’s recommendation to try one of the new rides at the Fair this year — the Fighter.

So, when a former employee stopped by the Fair to visit and mentioned that she didn’t get to ride the Fighter because none of her family wanted to ride it, I decided I’d take one for the Deep Fried crew and give it a test drive.

At first blush, the ride doesn’t appear to be too intense, but once you get locked in the seat and it begins its first spin around, it is a completely different story.

For me, the ride seemed to combine the sensation of several other rides, most notably the Scrambler, the swings and the Spider.

While the swings give you a smooth feeling of flying, the Spider provides a plunging, twirling dip that leaves your stomach a bit queasy and your head spinning. The other surprise to me was the how much I was propelled toward the outside of my seat, like that sliding feeling you get in the Scrambler. For whatever reason I did not expect that.

Personally, I liked the swing motion, but was happy when the dipping, plunging  motion came to an end. I think I rode it a bit too close to lunch time.

All-in-all, it is a great ride — maybe a little tame for those who like  their rides at an extreme level —  but definitely thrilling for most people.

Check out the video of part of our test drive. Just be warned: Video contains some screaming.

Let us know what you thought of this ride! 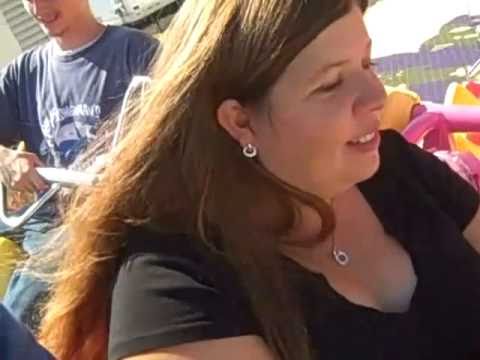