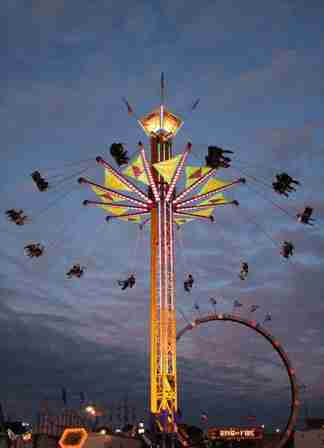 The Vertigo swing tower made its debut at the 2009 State Fair.

If you’ve grown accustomed to the rides and games at the N.C. State Fair, you’ll be happy to know that the company operating the midway will return again next year.

State Fair organizers have signed a contract with Powers Great American Midways to operate the carnival rides and games at the 2010 State Fair. Under the contract, Powers will pay the State Fair a fee based on the number of people who buy admission tickets to the Fair.

That financial arrangement has been good for the State Fair, which does not receive any taxpayer dollars to cover operations. Powers paid the 2009 State Fair more than $3.4 million.

Powers has operated the carnival at the State Fair since 2006. The company has introduced several new rides over the years, including the Vertigo, Vortex and Drag Strip. Powers’ performance history and the financial benefit to the State Fair were factors in the decision to sign a contract with the company for next year, says State Fair Manager Wesley Wyatt.