Poise, Confidence, Character, and a Bit of Swag

Apollo the pig entered the ring with a bit of attitude. Gideon, my brother, was guiding him around the show ring calmly, asking Apollo to walk at a nice pace and make a few turns in front of the judge. I stood from the sidelines figuratively biting my nails because I had managed to break that habit many years ago. I was in danger of starting back up again, though. I’m always nervous for my little brothers in the show ring, especially this time. Apollo had been known to be super hard-headed, but Gideon had worked hard at home to really train him and become part of a team with his pig. He was doing great until…

Apollo made a B-line for the gate. He wasn’t dumb; he knew the way out, and he was so over his time in the ring (although, it had been like only 5 minutes in). Gideon diligently tried to get him back to the center of the ring. There’s no way he’d place if he stayed in a corner. His attempts were met with some very grumpy squeals from Apollo. Gideon tried to use his body to push Apollo in the right direction, but Apollo had more than 100 pounds on him. I saw Gideon look up at me with horror and desperation in his eyes. I motioned for him to calm down and keep trying. I wanted to help but couldn’t. This was a contest.

The judge grabbed the microphone. My shoulders slumped. The class was over, and I knew that Apollo’s actions had ruined Gideon’s chances. Then, the judge began to talk about Gideon, and tears streamed down my face. The comments the judge said were that despite a difficult pig, the young man in orange never gave up and kept a cool head. For that he wanted to recognize him.

You see, more than the fact that I want my brothers to succeed in the ring and win, I want them to conduct themselves with poise, confidence, character, and a bit of swag. When youth learn these concepts from showing livestock, the goal has been met.

Gideon showed Apollo in more than 6 shows. Each show was a battle. Sometimes, Gideon wasn’t always calm, cool, and collected. He did, however, always go back in the ring despite the previous struggle and tried to keep a good attitude. 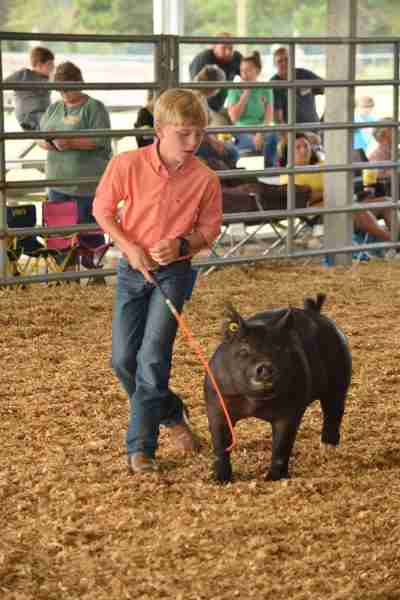 That was a couple of years ago, and Apollo and his stubbornness have never been forgotten. Gideon still talks about it. That experience taught Gideon valuable lessons. Since Apollo, he has won shows and lost shows.

At home, we work on his “show walk.” That show walk isn’t some choreographed number. To have a successful show walk, I look for that poise, confidence, character and a bit of swag. Even if his pig acts up, does he maintain poise? When the judge asks a question, does he confidently respond in a strong voice? Does he maintain his character and principles if he loses, or if he is cut off by another showman, or has to deal with a stubborn pig? Finally, does he have a bit of swag that shows his confidence and that he is enjoying showing?

In livestock showing, one thing is for certain—there’s only one winner but many competitors. While doing one’s best and striving for the win is important, it isn’t everything. My proudest moments as a showman or watching my brothers show hasn’t been about the banner, but the work behind the banner or the character that was exhibited. The work and character should be evident …..banner or not. My parents were adamant about that.

Whether you show livestock or not, may you conduct life with poise, confidence, character and a bit of swag.