Our own ice cream flavor? Madness! 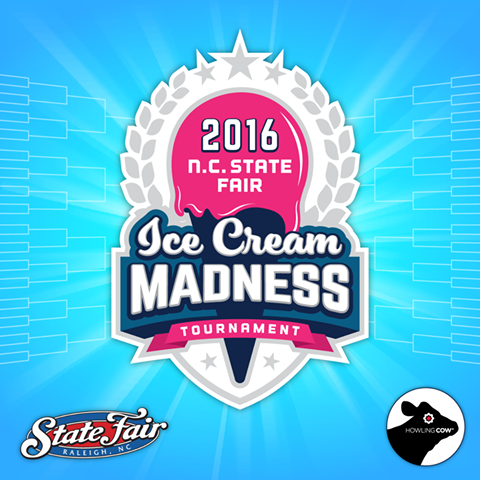 On any given day of the N.C. State Fair, at any given hour, you’re likely to find a line at the Howling Cow booth, formerly known as the N.C. State Dairy Bar. They got a new name and logo a few years ago, but the delicious, heaping serving of ice cream (and their rabid fan base) didn’t change at all.

Last year, we gave the N.C. State Food Science Club the opportunity to debut its newest flavor at our media lunch and the reviews were great. Plus, the Lemon Wafer flavor was a big hit with fairgoers. Which got us thinking … what if we got our very own State Fair flavor? We thought it was just a fantasy until we sat down with staff from Howling Cow. And that’s when the N.C. State Fair Ice Cream Madness contest was formed. Not only will we get our very own ice cream flavor, it will be served exclusively at the fair. And best of all — you get to help us decide the flavor!

Our Ice Cream Madness Tournament will be a bracketed challenge, with voting each week until we announce the Final Four on March 31.

The rules: Your flavor MUST include: ONE BASE FLAVOR (like chocolate) + ONE INCLUSION (like brownie bites) + ONE SWIRL FLAVOR (like marshmallow cream). You may also submit a name for your flavor, but the N.C. State Fair and Howling Cow reserve the right to accept or change any flavor names.

Why limit the imagination to just one base flavor, one inclusion and one swirl? Because all Howling Cow flavors are produced in the Dairy Processing Laboratory on N.C. State’s campus and production is a little limited. (All Howling Cow fans can donate to help them build a larger creamery.) A panel of ice cream enthusiasts and food scientists will help us evaluate all the ideas and narrow down the best (and most feasible) ideas to a truly Sweet 16, with public voting narrowing down the field to the Final Four. A celebrity panel of judges will taste-test the ingredients and help us choose the winning flavor.

There’s more to developing a new flavor than just a delicious idea. There are lots of practical issues the food scientists will consider when helping choose the Sweet 16, such as: Will the inclusion (like brownie bites) disintegrate in the ice cream before it makes it to consumers? If it doesn’t, does the texture become unpalatable? Or will the colors from the inclusion or swirl run into the ice cream, making it look unappetizing and unprofessional, and therefore unsalable?

So hop on over to Facebook and give us your best idea. It would be great if the flavor also celebrates the fair or N.C. agriculture, but it will all depend on public voting, so it’s an open competition. Not only does the winner get the ultimate satisfaction of seeing his or her flavor on the menu board at the Howling Cow booth at the fair, we’ll shower him/her with great State Fair prizes, too.

Here’s the timeline for the brackets:

If you’re interested in how ice cream is processed completely on campus, check out this video: