One Man Band performer Marc Dobson is the ultimate multi-tasker 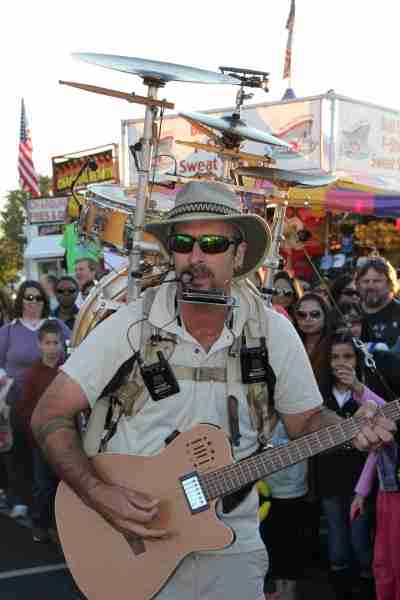 If you are at the fair, you are likely to hear Marc Dobson long before you see him. Dobson is a walking, singing, guitar-strumming, harmonica-playing, drum-beating band of one.  He has been entertaining crowds at the fair as the One Man Band for several years, with thousands enjoying his daily shows.

Dobson performs a variety of music from the 50’s thru the 90’s and no two shows are alike. With backpack drums hooked to his feet and a guitar in hand, Dobson uses his whole body to make music. It takes coordination and a level of multi-tasking that is quite impressive.

When asked how he became the One Man Band he said “simple, I decided I was going to do it. It incorporates many skills I have or love like backpacking skills, being a musician and using power tools.” He can play guitar, harmonica, drums, Chapman stick, bass, keyboards and tuba.  “I like choosing music that is popular and well known by all,” he said. “One of my newer songs I’ve learned is “Hooked on a Feeling,” the cool thing is that it’s an older song but it’s being played in a new movie Guardians of the Galaxy.”

When learning a new song, the guitar part comes easy for Dobson, the challenge is memorizing the lyrics. Songs can take anywhere from weeks to months to coordinate music and lyrics.

Dobson is on the road more than 100 days each year, playing about 20 fairs. He says the N.C. State Fair is his favorite. (We think he means it, too!) In 2014, Dobson pledged to donate $1 to the Ronald McDonald House for each silly face captured in a group photo in venues he played.  His photo at the N.C. State Fair captured “130 silly faces and 58 Ronald McDonald smiles.” N.C. State fairgoers must be awesome because it was the largest group photo from that year. 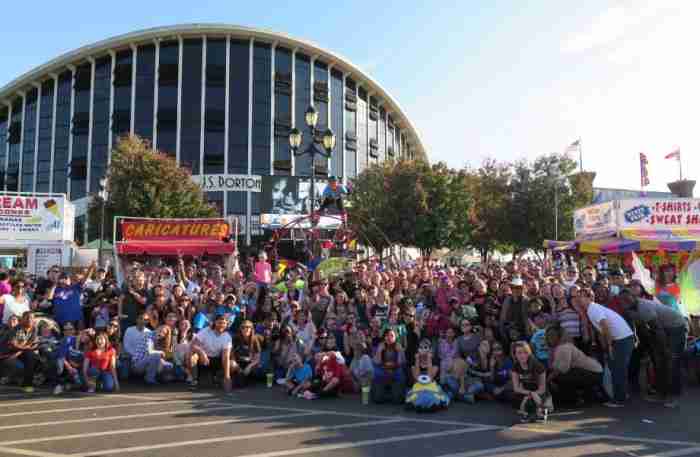 This year, the One Man Band will play several times a day near the Scott Building and Gate 11. Performance times are in the daily schedule.

The One Man Band is just one of dozens of free ground entertainers throughout the fair.  Other acts include the Axe Women Loggers of Maine, Farm Magic Agri-Puppets, The Moo-Gician, Racing Pigs and more.