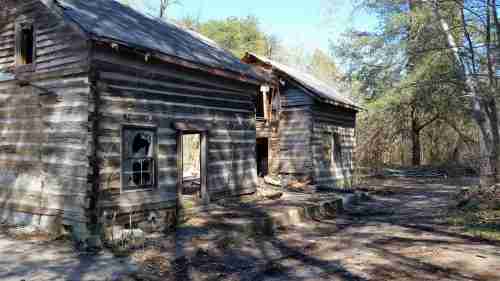 The original structure in Rockingham County that served as a stagecoach office in the 1800s.

Heritage Circle is adding another log cabin to its footprint, reworking the wood from a former stagecoach office from the 1800s into the new Public House. According to Bob Stanfield, the construction manager for the project, the stagecoach office was located in Rockingham County.

So, what is a stagecoach office? Stagecoaches are a popular symbol of the Old West. They were carriage-like vehicles pulled by horses or mules, and they were used to transport people, packages, mail and money. Although they originated in England in the early 1600s, stagecoaches did not appear in the United States until the late 1700s. Stagecoaches earned their name because they traveled from one stage, or resting place for commuters, to the next. Oftentimes, travelers would drop off their mail at the stagecoach office or stay overnight to recharge for their journey the next day.

Stanfield said the stagecoach office was converted into a house about 30 years ago. It was combined with another log cabin, and a breezeway connected the two.

“Originally, [the buildings] were built in separate locations,” he said. “All of them were united together to build one structure, and they were all moved together and they built a house out of them.” 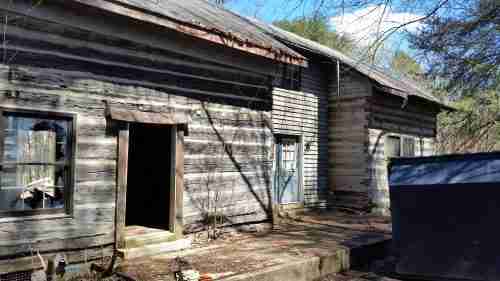 The stagecoach office was merged with another log structure to create a family home. The blue door is the entryway into the breezeway that connected the two buildings.

He said the State Fair obtained the wood after the home became worn down.

“The house was used, and people lived there for a while,” he said. “When they no longer lived there anymore, the structure began to deteriorate and it was no longer usable. So we found the building and acquired it. We saved only the logs.”

The construction crew kept a detailed record of the structure before taking it apart.

“We took pictures, documented where every log goes, disassembled it and shipped it to the fairgrounds to be reassembled,” he said.

But it wasn’t until the homeowners mentioned it to Stanfield that he found out about the home’s unique history.

He said the log cabin at Heritage Circle will be constructed in a way similar to the original to represent how cabins used to be made. “It is like a traditional log cabin was built back in the 1850s,” he said. “The top and the bottom [of the logs] are the original shape of the tree, and the front and the back were shaped to have a semi-flat surface.”

The construction crew faces several obstacles when working with older materials, he said. “Some of the hardest challenges we have is, when you find a building of this nature and disassemble it to move it, some of the material may be deteriorated beyond repair. So we have to take that particular piece of material, replace it and cut a new piece to try to make it fit.”

The Commissioner recruited Stanfield to work on the project because he has an impressive history of building log cabins. He began assembling them as a hobby, but he later taught a course on cabin construction at Rockingham Community College.

“It’s just a hobby,” he said, “something I like to do. It’s not a full-time occupation, just something I enjoy doing.”

During the State Fair, the structure will serve as the Public House where visitors 21 and older can sample flights of North Carolina beer and wine. The building will also house additional restrooms.

Check out this video below an interview with Bob Stanfield, construction manager for the Public House.