Nothing could be Finer! 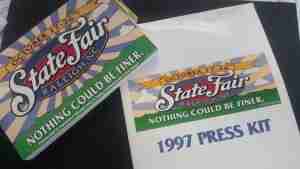 Longtime fairgoers may remember this year’s theme. The year was 1997. The main educational exhibit at the fair for the third year in a row was CyberSpace, an exhibit that focused on the newest technology, including a thing called the World Wide Web. The department sponsored an agricultural exhibit called Harvest Time that showcased baby farm animals and crops. The NBA Jam Playground was featured free entertainment and the Joie Chitwood Thrill Show promised to pack out the grandstand. The previous year, we made it through one of the worst hurricanes to ever hit North Carolina, Hurricane Fran, and still set an attendance record at the time of 759,429 fairgoers. So yes, it felt like “Nothing Could be Finer” than to be in Carolina.

We are returning to that theme this year. After all, “Nothing Could Be Finer” epitomizes the foundation of our mission — seeking out and showcasing the finest of North Carolina. Whether that be in a horse show, livestock show, culinary, handicraft or art competition, or with our new “Homegrown North Carolina” concert series in Dorton Arena, we are proud of the talented people of our great state. The State Fair is a way to celebrate everything that is uniquely North Carolina.

And with this heat wave we’re going through, I think we all can agree that nothing could be finer than North Carolina in October. We’re a mere 118 days away from cool, crisp mornings and warm, sunny afternoons!