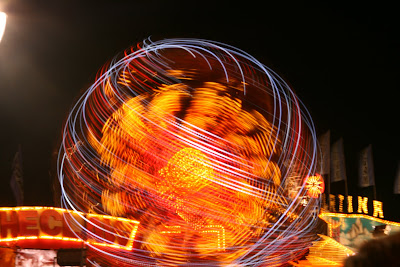 I had a chance yesterday to talk with Charlie Belknap from Powers Great American Midways, the official carnival provider of the 2008 N.C. State Fair. Powers has been busy since we saw them last October. As a matter of fact, they’re in Maryland this week, traveling to New York next week, and on to Pennsylvania before making their way back south for the Wayne Regional Agricultural Fair (Goldsboro) in September.

According to Charlie, they’ve been busy and are anticipating another huge Midway at the Fair, with around 110 rides – give or take a few. For those of you who aren’t aware, this is the largest Midway in North America. (If there is a larger Midway, we haven’t been able to find evidence of it.)

In the off season, Powers purchased several new family rides. These are rides that will be in Kiddieland, but will accommodate parents. (I don’t have kids, but I can see how this is a great idea!) Kids can take their parents for a spin on a tricked-out motorcycle on the new ride, Hog Wild. Surf’s Up takes you to the top of the waves and the Cobra Coaster is a kid-sized roller coaster with a fun Eygptian theme. 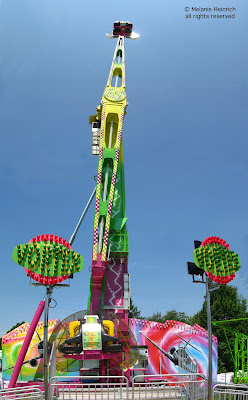 As usual, Powers is bringing along several new “spectacular” rides to keep the big kids happy. The Vortex (pictured above) is a brand new ride to Powers (a similar ride was on the grounds a few years ago). This one takes eight riders – four on each end of a 100-foot-tall arm. Riders are swung around in a huge circle at speeds of about 60 mph, which exerts up to 3.8gs on the riders. Not only will folks on the ground be mesmerized by this ride, the lighting package will dazzle as well. Powers added a computerized LED light package to the ride for a cool light show.

Powers is also introducing the Mind Blaster to the N.C. State Fair, and they purchased a new Sizzler for this season. Another new ride is on order from a manufacturer in Italy, but it is uncertain if it will be delivered in time for the Fair. We’ll just have to wait and see if it will debut this year!

In addition, Powers is teaming up with Wade Shows to bring us “the grandest roller coaster the N.C. State Fair has ever seen,” according to Charlie. “It’s better looking and more thrilling than anything you’ve had before.” To be honest, I was a little skeptical, until I saw a picture of the RC-48 Coaster. Now I’m a believer. (I know, I shouldn’t have doubted you Charlie!)

I’m not usually a ride person because I can’t handle the spinning rides, but I think you can definitely expect to find me on the Vortex and the RC-48 this year!

A shout-out to Powers Great American Midways: In addition to the new rides, they are adding several new concession stands, all of which are outfitted with LED lighting systems. LED lights are brighter and consume much less energy than traditional lights, making a perfect tie-in with our green initiatives. For example, the LED lighting system for the Vortex will use just 7 amps of power, compared to about 80 amps if it was outfitted with a normal light package. What a great way to help conserve energy costs and reduce our carbon footprint!