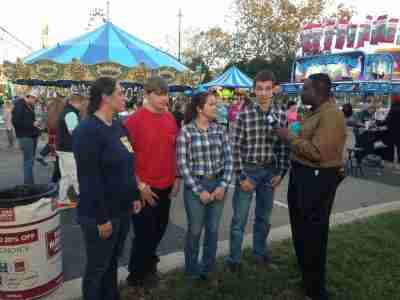 On Oct. 8, 2016, Hurricane Matthew struck North Carolina and left homes, roads, schools and land damaged in its wake. For Gray’s Creek High School FFA students, the storm caused more than just physical harm — they were left questioning if they could show the livestock they spent months preparing for competition at the N.C. State Fair.

“We have worked six months nonstop for this, and this is the only chance we have,” Tara King, FFA adviser and agriculture teacher at Gray’s Creek, told the school board in the days leading up to the fair.

Despite all Cumberland County schools being temporarily closed, King and her six students received special permission to go to the fair. One year later, they remember the hardship they endured and the dedication they had to participate in the fair competitions despite several challenges.

Gray’s Creek, located in Hope Mills, backs up to the Cape Fear River and borders Robeson County, which experienced severe storms throughout Matthew. King said this made the school twice as vulnerable to flood damage.

The hurricane submerged most of the roads leading to the school, and left several homes standing in water. Jakob Kirk, a former Gray’s Creek FFA member who is now a freshman at N.C. State University, said his house had several inches of water seeping through the floorboards.

“It was about 3 inches, up to the base boards in our house,” he said. “It was pretty chaotic at first, and we had the week off from school because of the hurricane. We had to get up really early and take all the carpet out of our house, then take it to the dump, but getting to the dump was hard because the roads were closed. It was like a maze.”

Looking back on it, he said the water damage could have been much worse.

“But we were still lucky we got to keep our house. If it had gone up a few more inches, it would’ve gone into the dry wall and we couldn’t live there,” he said. “We got lucky considering everything. There were people’s houses where it was all the way up to the second story.”

The flooding closed most major and secondary streets, said King, the FFA adviser. Because it was difficult to get to the school’s farm, some students had to step up to take care of the animals. John Faatz, an FFA member who lives close to the school, would walk there each day to feed and watch over the livestock.

“He would walk to the barn and make sure everything was OK when we couldn’t get there,” King said.

Faatz, 16, now a junior at Gray’s Creek, said he would make sure the animals could stay alive.

“During the hurricane, every day I had to feed the animals, check their water and make sure their stalls were clean,” he said. “I had to go up there multiple times during the day to make sure the animals were safe and not drowning.”

Preparing to show livestock for competition requires months of hard work and diligence. Kirk, an intern with the livestock facilities at the time, said the process begins in the early summer and continues until the final days leading up to the fair.

“I was one of the main interns at the livestock facilities, so I was there from the day they’re born until they go to slaughter,” he said. “We make sure they’re healthy, and assign them to a person in the early summer who is going to show it. Then we start training the animals in summer until the State Fair for that person.”

Some of his responsibilities included making sure the births went smoothly, socializing the babies, treating illnesses and tagging their ears. He said most of the training happened before the hurricane, but Matthew disrupted the last steps in the process like grooming and making sure they were fed and healthy beforehand.

With all of the work they put into getting ready for the shows, the students felt confident about entering their livestock, even in the midst of uncertainty about storm recovery. But one of the biggest obstacles proved to be travel.

“The biggest issue was just physically getting there,” King said. “The roads were washing out, and the bridges were, too.”

“The travelling was a big deal, and communicating with everyone was really hard,” he said. “We lost power, we lost internet. We couldn’t communicate with some people.”

King said one thing that helped them on their journey was an app called Waze, which constantly alerted them to closed roads, detours and traffic along the way. Although it took them several hours longer than usual, they successfully arrived at the State Fair and competed in the contests. Several students placed in the competitions, including Faatz in the Market class and Showmanship class.

Where are they now?

About five months following Matthew, Hope Mills began returning to normal. Most major roads were fixed and operating shortly after the hurricane, but some secondary streets were left unrepaired. Now, almost all alternate roads have been mended, including one that acts as a dividing line between Cumberland and Robeson counties, which was fixed at the end of June.

“Some of the smaller roads took a little longer,” King said. “It wasn’t a priority. But for the most part, I’ve been impressed.”

However, some are still trying to recover from the water damage. At the time Kirk was interviewed, his family had just begun laying new flooring in their home.

“We didn’t have time to replace the floors during the school year. My dad works, my mom works and I’m in school, we couldn’t pause our lives to put floor back in,” he said. “We’re doing it one weekend at a time during the summer. But since it happened we’ve been living on a concrete slab.”

Kirk started at N.C. State University in the fall, taking pre-veterinary classes. The deadline to apply happened during the flooding, but he said he felt lucky because the university extended it since so many in-state applicants were affected.

While he is no longer a full-time intern, he said he still occasionally helps out at the livestock facilities.

“For two summers I worked there for pay,” he said. “My first period for the first semester of my senior year was essentially taking care of the facility. Now I’ve mostly taken a back seat to some of the younger interns, but I still volunteer whenever they need me.”

Faatz said the Gray’s Creek team is preparing for the 2017 State Fair.

“Each student in the barn is assigned an animal over the summer. Until about halfway through the summer, they work with every animal,” he said. “We are in the process of deciding which animal will go to which show, we have our mock show coming up in the next couple of weeks. We will decide then who gets which animal.”

He said he plans to attend several smaller fairs in Robeson and Cumberland counties as practice for the statewide event. Matthew prevented him from doing this last year.

While most Hope Mills residents have returned to a more regular routine, Matthew created several major setbacks for the families and their animals. Through it all, King said she was most impressed with her students’ ability to overcome obstacles.

She said she is proud of them for getting back on track.