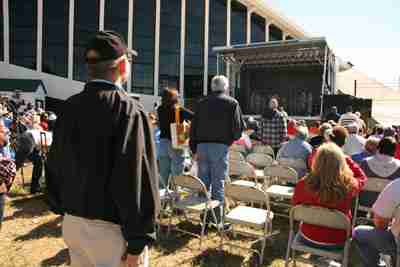 Former members of the military are recognized by the 82nd Airborne All-American Chorus at the 2008 Fair.

Today, on Sept. 11, we pause to remember the men and women who lost their lives in the tragic attacks in 2001. We also must remember the thousands who have lost their lives since then on foreign soil fighting to protect us from similar attacks. To the fallen and to those who continue to serve, we say “THANK YOU” for protecting our freedom.

The 2009 N.C. State Fair will pay tribute to members of the U.S. Military for their service to the country on Military Appreciation Day, Wednesday, Oct. 21. The day will feature special activities and performances by military bands. My brother is a U.S. Marine, currently station in Iwakuni, Japan.  So I am excited that the 2nd Marine Division Band from Camp Lejeune will finally be represented on Military Appreciation Day. (My brother was hoping to be stationed at Lejeune next year, but alas, he’ll be across the country in San Diego at Camp Pendleton, instead. Either way, it sure beats the 12-hour time difference between here and Japan!) Camp Lejeune and Camp Pendleton are the largest Marine installments in the country, so it will be great to see them represented at the Fair.

Active duty, reserve and National Guard service members or spouses with valid military ID will be admitted free along with four guests. The day is filled with concerts on the Waterfall Stage. So far, the Military Day schedule is as follows:

You’ll notice that the 82nd Airborne Special Airborne All-American Chorus is not listed as they are unable to attend this year. Godspeed, soldiers!