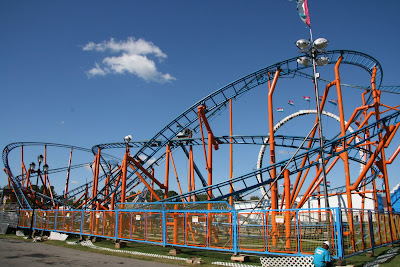 Name this Coaster!
The ride company behind our very impressive Midway this year is giving you a chance to really make your mark on the Fair. Powers Great American Midways is bringing the world’s largest portable roller coaster to the Fair for the very first time–and wants visitors at the N.C. State Fair to give it a name.
Currently, it’s called the Pinfarri RC-48, which sounds more like R2-D2’s third cousin than a truly awesome Midway thrill ride. But alongside its fellow rides–including the Vortex, the Avalance, the Claw, and one our blogger’s favorite, the Flying Bob–that just won’t do. Fairgoers who visit on Thursday, Oct. 16, can submit a name for for a chance to win a prize pack that includes five admission tickets, T-shirts and ride books. Representatives from Powers Great American Midways will choose the winner. Names can be submitted on Thursday, Oct. 16, from 3-11 p.m. only before the winner is announced Friday, Oct. 17.

So if you’re coming on Thursday to take advantage of the Preview Day Unlimited Ride Wristband, be sure to submit your genius ride name at the guest relations booth, near the Commercial and Education Building in Kiddieland. You’ll win a pretty sweet prize pack with five admission tickets, ride booklets and Fair T-shirts. That, along with Fair Midway ride immortality.