The N.C. Department of Agriculture and Consumer Services hosts two annual fairs — the N.C. State Fair in Raleigh and the N.C. Mountain State Fair in Fletcher.

The Mountain State Fair starts this Friday at the Western N.C. Ag Center and runs through Sept. 19. The grounds are starting to take shape — rides are going up, exhibits are moving in, musical stages are in place, and there is a lot of activity on the grounds. 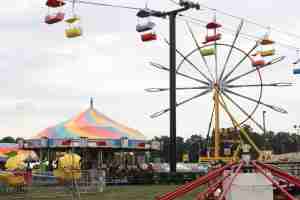 The midway at the Mountain State Fair is starting to take shape. The fair opens Friday at 9 a.m.

Visitors to each fair will see livestock, educational exhibits, musical entertainment, racing pigs, crafts, food and rides. But despite the similarities, each fair has its own unique flavor and feel.

The Mountain State Fair’s clogging competition on the opening weekend is a personal favorite of mine. Clogging has deep roots in North Carolina’s mountains, and competitors take the contest seriously while still having lots of fun. The energy that the individual cloggers and teams bring to the stage is incredible, and even those just watching the competition can’t help but catch the spirit.

One of the first years I worked at the Mountain State Fair I was taking pictures of the clogging competitions, when one of the guys in the individual competition gave me a quick wink. I kept my camera trained on him and in the next minute he jumped up and clicked his heels together — a moment I was lucky enough to catch on film thanks to his signal. 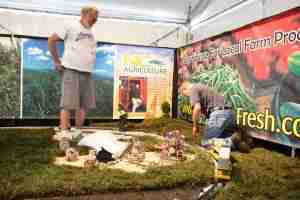 Workers are readying the Got to Be NC Agriculture display at the Mountain State Fair.

Another of my Mountain State Fair favorites is the llama competitions. The llamas are extremely inquisitive and photogenic. They have the longest eyelashes and are quite elegant in their movements. In one part of the competition, the llamas make their way through an obstacle course. There are also carting competitions where llamas are hitched to small carts.

They are fun shows to watch.

The llama shows are held the opening Saturday and Sunday.

This year I am also looking forward to some of the grounds entertainment including K-9s in Flight, an exhibition of Frisbee-chasing canines; the Human Cannon Ball; a working Border Collie demonstration and the Mountain Music Competition.  The K-9s in Flight perform three shows a day. The Human Cannon Ball performs twice on weekdays and three times a day on Saturdays and Sundays. The Border Collies show their stuff three times a day Friday through Sunday. The Mountain Music Competition features nightly performances from 7-9 p.m. Sept. 10-18.

That’s the nice thing about the fairs — there is something for everyone!
If you have never been to the Mountain State Fair, I would encourage you to  add it to your must-visit list. The evening weather this time of year is generally nice and cool and you could not ask for a more scenic backdrop for a fair than a rolling mountain range. All-in-all, it is pretty spectactular.