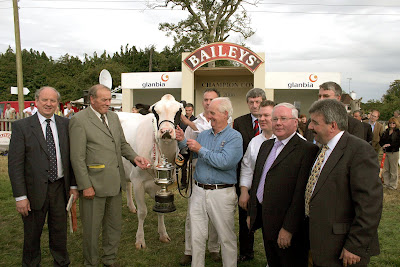 I just came across the Bailey’s Champion Cow Competition held every year in Ireland. Bailey’s, the maker of Irish cream, holds the contest in which 30 cows compete for the countrywide title. (Get it? “Moos Ireland?” As in, watch out Miss Ireland, Bessie is on your tail? Sorry, you can blame that pun on Ireland’s RTE News.) The ladies are judged on how shapely their legs are, the curves of the backs and the shape of their udders.

I couldn’t find a pictures of this year’s winner Lumville Danois 2, but I have to say that the 2006 winner above does have very nice legs. The IrishTimes.com reported that this quest for Ireland’s sweetest cream really isn’t that far from an actual beauty pageant: Lumville wore a hair piece on her tail, an acceptable enhancement for the competition. Says her owner: “When she is not being shown she is just another working dairy cow and it’s very hard to get the ball on the tail right so she is wearing a piece.”

Hair extensions for livestock? Hilarious. It reminds me of the gorgeous braids plaited into horses’ hair at the Fair that always include ribbons and flowers. Don’t miss out on any of the fun at this year’s Fair horse shows.