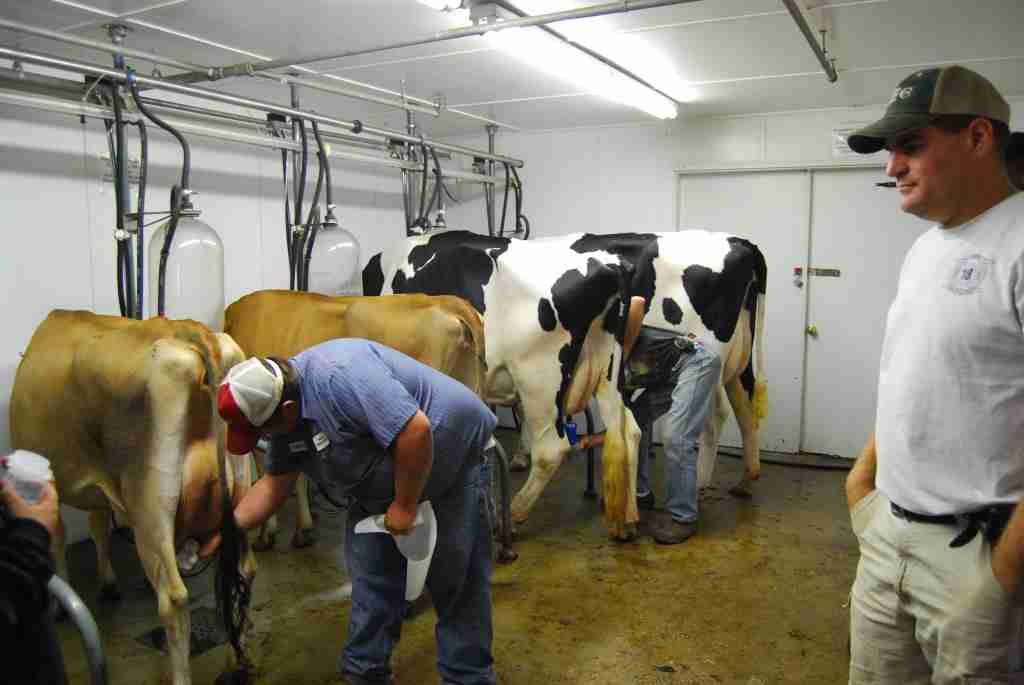 The milking parlor in the Graham Building is open 24 hours.

It’s Dairy Show weekend at the N.C. State Fair, and the Graham Building is full of Jersey, Ayshire, Holstein, Guernsey and Brown Swiss cows. In addition to being combed, trimmed and fluffed for showing, these cows will have to be milked twice a day.

The milking parlor in the Graham Building milks around 150 dairy cattle twice a day Thursday through Sunday. For several years this milk was hauled to Ashe County Cheese in West Jefferson to be used in their cheeses. This year, the milking parlor received its Grade A certification and will be used to make Howling Cow Ice Cream at N.C. State University. The proceeds from the milk sales go to support youth programs with the N.C. Purebred Dairy Cattle Association.

“When the milk was sent to Ashe County Cheese, we would pay a hauling fee,” said Nancy Keith, superintendent of open and junior dairy shows. “Howling Cow is a lot closer, so the money we used for hauling can go back into youth programs.”

Show workers and exhibitors like that this milk is used as well. “Many fairs just dump the milk out,” said Keith. “We are all glad that we can use it and have the money go to a good cause.”

The milk parlor has six milking stations. Teat cups are placed on the cows and the milk is pumped to a holding tank. From there, the milk can be dumped if the cow is on antibioctics or pumped into a large refrigerated stainless steel tank. Barn manager Earl Franks estimates anywhere from 500 to 800 gallons are pumped into the tank daily. The N.C. State Dairy Processing Unit picks up the milk early each morning.

Franks, who has worked in the milking parlor 38 years, says it takes about five or six minutes on average to milk a cow; some might take longer. “Dairy cows are about the prettiest animals there are, and mixing the different dairy breeds makes a good-tasting milk,” he said.

Howling Cow Ice Cream is served at the N.C. State Dairy Bar by the Hobbies and Handicrafts Building.