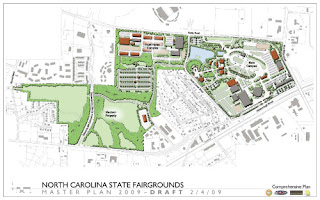 The State Fairgrounds Master Plan was unveiled today. There aren’t a lot of specifics yet, but Kristen Hess of HH Architects explained how they came up with a plan for the proposed 48 new projects to be completed in the next 2-3 decades to improve traffic flow, parking, space limitations and more.

I think it’s important for people to realize that the State Fair does not operate with taxpayer money. The State Fair is completely receipt-supported, so we can only make improvements when we have the money in the bank to pay for it. Commissioner Steve Troxler announced today that the estimated cost of completing the entire project would be around $121 million. As of right now, they have not prioritized what needs to be done first. They are looking for feedback, so check out the schematics and let us know what you think is a priority, (keeping in mind that we have to make the money first!)