Making memories of a lifetime one year at a time

Firecracker and I are celebrating our 20th State Fair. Yes, Firecracker started working when she was 5 years old! (hahaha…very funny.) 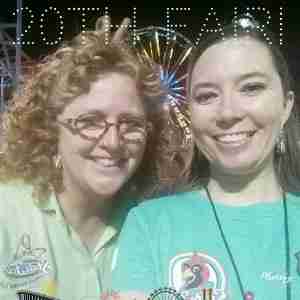 So in honor of our 20th anniversaries, we thought it would be fun to come up with our Top 20 Fair Memories to share with readers.

When I was thinking back over all the cool and fun things I have gotten to do at the State Fair, the one thing that stood out in almost every one of them is the fun I had with the people involved. And that is really what the State Fair is all about, the fun memories shared with friends and family. Firecracker’s notes are in italics.

So, in no particular order, here are Firecracker and Merrie Go Round’s Top 20 Memories of the N.C. State Fair:

1. Getting a tobacco stringing/tying lesson from Sandy Jones, who is a three-time champion in the annual tobacco tying contest. This year Sandy tied a stick of tobacco in under a minute, so she was a great teacher. I was only a s0-so student, but I tried hard and she was super patient.

2. Miss Debbie’s Specialty Apples “Club.” Ok, so we’ve been sampling Miss Debbie’s creations each year, but the “club” this is something we started in 2014. Each day, one of the “club members” buys an apple and at a designated time we cut it in slices to be shared with all the club members. We get to try 11 different apples each year, which is a great way to experience all the delightful apple tastes! Take-away lesson from the apple club, sharing is caring!

3. Learning to cane a footstool in the Village of Yesteryear. I have always wanted to know how to do this, and Bill Williams was kind and patient enough to teach me. The creativity and dedication of the Village crafters is a wonder to be around.

4 & 5. The food! We are the Department of Agriculture and we love to eat. It’s fun to learn about the newest foods and be one of the first to try it out. But we all also have some favorites that we have to get at some point during the fair. Lucky for us, we have 11 days to cram it all in!

6. Seeing the State Fair awaken each morning. We get a chance to be at the fair extra early some days (think 6 a.m.), so in the transition from dark to light, the fair booths and rides stand watch to the sunrise and the bustling movement of workers setting up and restocking. It is like no other time.

7. Watching the sun set from the top of the Kerr Scott Building. The west end of the building is a great vantage point for photos of almost the whole fair. At dusk, it’s a beautiful place to be to watch the fair lights start to twinkle. It’s a magical time of day.

8. Riding the new ride TopSpin in 1997 at 6 a.m. with a news crew. It was my second year at the fair and one of my first early a.m. television interviews. Since I like the thrill rides, it was fun!

9. Coming up with new State Fair themes and watching them come to life. From Seriously Twisted Fun, Whole Lotta Happy, Bumper Crop of Fun and others, it’s fun to be part of the creative process. 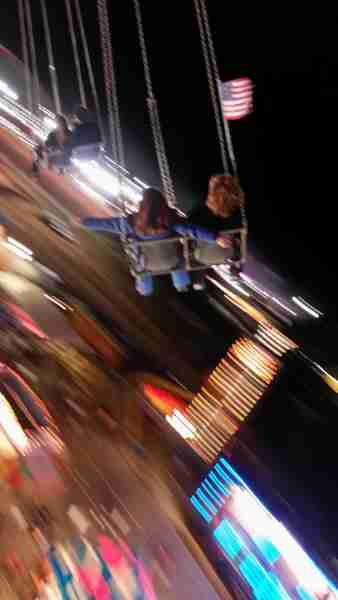 10. The first time we reached 1 million fairgoers. We love it when people show their love for the State Fair, and in 2010, more than 1 million showed up in person to prove just that! This year we topped 1 million for only the third time, and it was the second largest attendance in the history of the fair, behind the 2010 record.

11. Hanging out with the Stanley Cup. When the Carolina Hurricanes won the Stanley Cup in 2006, it naturally made a visit to the State Fair that year. It hung out in the Got to Be NC tent, took a ride in the Big Cart and even took a spin on the Ferris Wheel. Just being near the Cup was a rush. Go Canes!

12. Making fair friends – Over the course of 20 years, even with just seeing people for only 10 or 11 days at a clip,  you develop and deepen friendships. We often compare the fair to a small city, and nothing reinforces that idea like walking around the grounds and recognizing people away from their particular areas of the fair. It’s always nice when they wave or say “hi.” Each year at the fair I am grateful to see so many familiar faces, whether it is in the food booths, at the Fool the Guesser games, in the Village of Yesteryear or Heritage Circle, in the exhibit halls, at the gates or information booths, or in the fairgrounds offices.
As a North Carolina transplant with no other family in the area, it occurred to me that I spent much more time with my State Fair family than I do most of my real family. If only I had the luxury of spending 11+ days of the year with my real family!

14. Taking photos of people enjoying the fun! I love taking photos and when I get good ones, it is like magic!

15. Teamwork. Most of the year, our office is in downtown Raleigh. We each have individual offices, so we have plenty of peace and quiet. For the month of October, we move our computers and other belongings out to the Fairgrounds and share a large room on the second floor of the Scott Building. It’s a definite change of pace (and noise level), but it’s great to have amazing coworkers who all love the fair and do a great job of pitching in with whatever needs to happen. We’ve been through some really hard days, but we’ve had a lot of really amazing times together, too. We have spontaneous dance parties while stuffing goodie bags and lots of inside jokes (BATTERIES!). Most of all, Lego got it right… Everything is Awesome when you’re part of [the State Fair] team!

16. Last night tradition. On the final night, typically about 8 p.m., several of us will venture out onto the fairgrounds to ride a few rides and hang out on the midway until it shuts down. The final night is always bittersweet — we’re exhausted and ready for our normal schedules, but we hang on to the fun until the last possible second.

17.  Watching the fairgrounds change dramatically. When we first started, there was ostrich racing around the track at the grandstand and an eyesore of a building called The Red Cross Lounge. We’ve seen The Expo Center, and Martin Buildings get built, the new Midway take shape where the track used to be, North Dorton lobby get renovated and countless other improvements made over the grounds.

18. The Jaycees Turkey Shoot. Four of the Deep Fried Crew took on the challenge and we generated a lot of laughter as we discovered how poor of shots we were. A few of us barely nicked the target. One was pretty close to the bulls eye! This was my first time shooting a shotgun. Needless to say, I didn’t win the turkey!