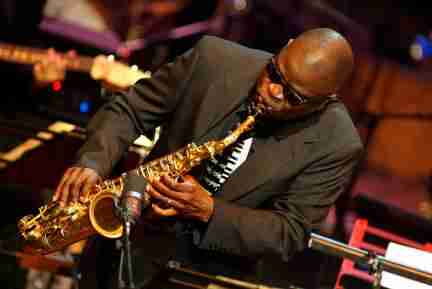 A musical legend will close out the Homegrown Music Fest at the N.C. State Fair this Sunday night. Maceo Parker is a saxophonist whose music is described as 2 percent jazz and 98 percent “funky stuff.” And, longtime James Brown fans might remember Parker being called out in Brown’s songs with “Maceo, blow your horn.”

For more than 40 years, Parker has had the opportunity to “blow his horn” for music icons like George Clinton and Prince. He has also made guest appearances on songs such as “What Would You Say” for the Dave Matthews band and on De La Soul’s album Buhloone Mindstate. He also played on Jane’s Addiction’s track, “My Cat’s Name Is Maceo.”

Kinston-born and bred, Parker is a state treasure. He was inducted into the N.C. Music Hall of Fame in 2011, and this past May he received the N.C. Heritage Award. We caught up with Parker and asked him a few questions about what it means to be from North Carolina and what we can expect from his show Sunday night.

An Evening with Maceo Parker is Sunday night in Dorton Arena. The show starts 7:30. Tickets are free. Floor seating for Dorton Arena concerts is free, but reserved/ticketed. Tickets may be picked up at the glass Ticket Booth on the north side of Dorton Arena the day of the concert. There is a six-ticket limit per person. Ticket booth hours are 9 a.m.-7:45 p.m. Permanent riser seating is first-come, first-served and does not require a ticket.

“Be sure to include a boldface love.”
~Maceo Parker