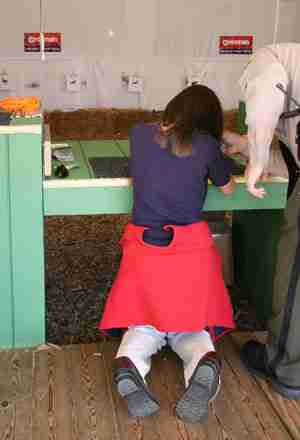 Firecracker taking her first shots with a pellet gun. (I think this is where the officer is trying to get me to use my other eye.)

So there’s this white tent that sits behind the Midway, next to the Holshouser Building. I’ve passed it a gazillion times as I’ve zipped along the backside of the fairgrounds trying to avoid the crowds. But I’ve never actually been inside or really known what they do there. So today, I decided to find out.

The N.C. Wildlife Resources Commission hosts a nondescript tent to educate fairgoers on the important work of the commission, as well as to teach hunter safety. A friend’s sister always stopped by the booth to try her hand at target shooting, so when she was in town today, we stopped by for not only my first trip to the Wildlife Resources booth, but also my first time shooting a gun. Granted, it was a bb gun, but as Santa Claus told Ralphie in A Christmas Story, “you [could] shoot your eye out.” They have a free shooting range hosted inside the tent, and you get to take your target home with you when you’re done.

Now it’s been a long time for me since seventh grade when the Hunter Safety Course was a required part of P.E. in the school system where I grew up in southeastern Virginia. When the wildlife officer told us to pick up the gun and turn off the safety, I had to ask where the safety was. (In seventh grade, we never actually handled a gun.) The officer then showed me how to line the gun up with the target, and I was soon shooting away at the rabbit on my target. (At one point an officer came by and told me to shut one eye and use the other. I think I was using the other one since that lens was less scratched and I could actually see.) The verdict: Rabbits of North Carolina  can breathe easy. I’m pretty sure it’s just a flesh wound. But overall, I’m pretty proud of my first attempt. At least I was near the rabbit! 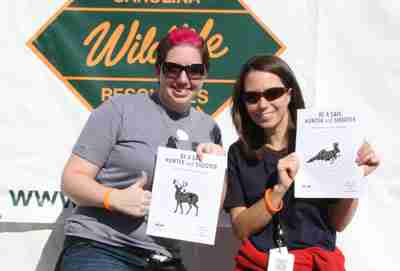 Mandy and me with our results

There is more to the Wildlife Resources exhibit than just the shooting range. The main portion of the exhibit shows the work of the Wildlife Resources Commission to manage and track endangered species within the state. There’s lots of cool things to see and do and some free giveaways. Think you can tell the difference between a raccoon skull and a beaver skull? You can even shop in the wildlife store, which has lots of cool hats, shirts, jewelry and publications depicting the diversity of wildlife in our state.

So don’t make the mistake I did. Don’t wait until your 14th Fair (or actually my136th trip to the Fair) to visit the N.C. Wildlife Resources Commission exhibit.