With only (gasp!) 48 days before the gates open for the 142nd annual N.C. State Fair, our advertising is slowly being unveiled. The online campaign started in early August when advance ticket sales began to promote our early bird special through Aug. 30.  [You can join in on the online promotion by getting your own web banners here.] This week, we started hearing rumors that the billboards were up, which is about a week ahead of schedule.

So today at lunch, I ventured up Capital Boulevard in Raleigh to see for myself if the rumors were true. And lo and behold, they are. (Thanks to Mike Coleman of Douglas Displays for that magic!) 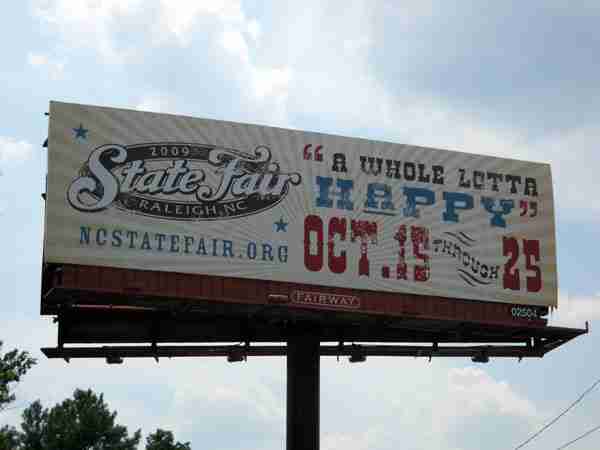 The colors look just a little bit faded, which is perfect with the rugged letterpress design. This one is located just south of the Old Buffalo intersection (across the street from Chuck E. Cheese). But with the simplistic design, hopefully even when you’re speeding past it, you’ll be able to grasp the main points. The State Fair will be held Oct. 15-25 and for more information, hit up our Web site at ncstatefair.org.

The radio and television ads will be up next and will be unveiled a little closer to the Fair. In the meantime, let us know where you’ve seen the online advertising or the billboards!