International relations at the State Fair 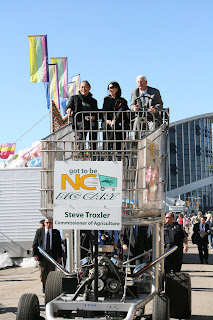 Japan’s ambassador to the United States visited the N.C. State Fair Sunday, and got a ride he wasn’t expecting.

Ichiro Fujisaki and his wife, Yoriko, went for a ride in the Got to Be NC Big Cart with Agriculture Commissioner Steve Troxler. The 13-foot-tall shopping cart is used to promote North Carolina agricultural products at festivals and parades around the state.

Fujisaki was in North Carolina to attend the annual meeting of the Japan-U.S. Southeast Association, an organization that promotes trade and investment between Japan and the Southeastern United States. Japan is North Carolina’s largest export market, buying $750 million worth of N.C. agricultural products in 2006. The country is the largest importer of N.C. pork and tobacco.

The ambassador was dressed for both the fall weather and the locale in a black hoodie with “North Carolina 1789” on the front. He seemed at ease during the ride. The same cannot be said of his security detail.

Fujisaki isn’t the first VIP to cruise the fairgrounds in the Big Cart. On opening day of the 2006 State Fair, Commissioner Troxler took the NHL’s Stanley Cup and its handler on a ride.