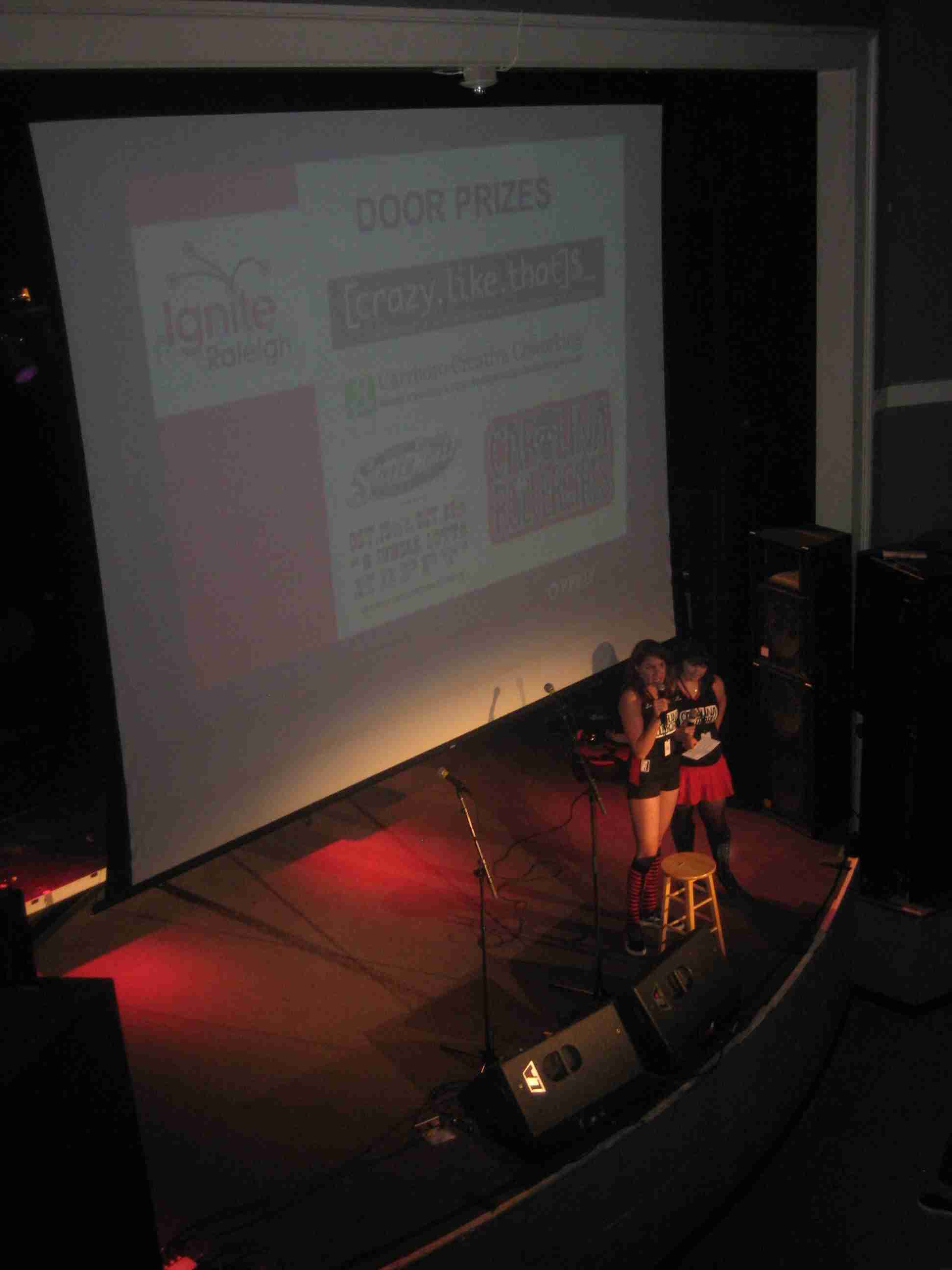 Two members of the Carolina Rollergirls (one of whom works at the Department of Agriculture!) present the State Fair prize pack.

The Bearded Lady, Firecracker, GreenThing and I were lucky enough to attend the Ignite Raleigh event last week at Lincoln Theater, and it was a really cool night. Today, one week later, we were still talking to the rest of the State Fair press office and still trying to answer–“What exactly was Ignite Raleigh?”

The premise of the event was “5 minutes and 20 slides. What will you say? Enlighten us, but make it quick.” Residents of the Triangle presented carefully thought-out (and quick!) slide show presentations on a whole slew of topics, ranging from running the Disney marathon to entrepreneurial best practices. Wayne Sutton, one of the event’s organizers, even presented “19 Reasons Why the Triangle is Better than Silicon Valley,” and we’d like to submit a 20th reason: Because we host a State Fair, of course!

We were also able to attend the event to give away our very first N.C. State Fair Prize Pack to one lucky attendee–we had to offer up an IOU because tickets weren’t even printed at the time. Congrats to Patrick Clarke, who we were lucky enough to run into after the event. Out of the admission tickets, tie-dye T-shirts, bumper stickers, posters and more that were included in the prize, Patrick was most pumped about the 2009 State Fair notepads. We have to give it to him, though–they’re pretty cool notepads!

We were also excited to see a few other ways the Fair was incorporated into the event. Shawn Rocco’s “The Best Camera is the one you have with you” presentation–which focused on his unique photographs taken entirely with his cell phone–featured a great picture of Dorton Arena. One of the Carolina Rollergirls who helped dole out the night’s prizes is an employee of the N.C. Department of Agriculture and Consumer Services.

We’d like to give a big shout-out to the Our Hashtag guys who put on the event and for including us in the night. We’ve had a great year getting to know the social media family of the Triangle, and we look forward to more events like this that allow us to put Facebook profile pictures and Twitter avatar names with real people.