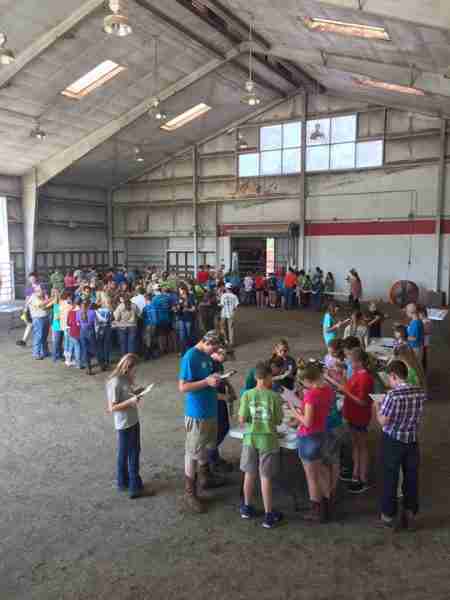 It was hot. The kind of hot that North Carolina summers are known for, where the humidity envelops you like clothes. It’s the kind of hot day where air conditioning is preferred. However, more than 100 youth gave up a few days of air conditioning and sweated through the days of competition during the state livestock contests — skillathon, judging and quiz bowl on July 20-22 at the N.C. State University Beef Educational Unit in Raleigh. Youth traveled from all over the state to start the three-day weekend of livestock contests.

Thursday morning came early, but youth were ready to compete after practicing for months. Some were first timers and others were veterans. Some came to win new titles and others came to defend their titles from last year. For some this was their chance to qualify for nationals. It would all come down to how much they remembered.

In addition, everyone sat down to a multiple-choice livestock test that quizzed participants on their knowledge of breeds, diseases, practices, current events, genetics and other livestock-related topics. Once individuals had completed their test, they met with their teammates for a final team problem like this one:

Team Activity: JUNIOR
Problem:
Your employer, Cargill Meat Solutions, has asked you to find the market value of a pen of 100 market steers on a live weight and carcass basis (assume all animals grade select). When you load the animals on to the trailers the total weight for the pen is 125,000 pounds. Your boss tells you that the average dressing percentage for these animals is 65%. Today, Cargill is paying $2.05/lb. for carcasses and $1.20/lb. for live cattle.
Directions: Please use the information above to answer the following two questions.
1. How much is the pen of steer’s worth on a live weight basis?
2. How much is the pen of steer’s worth on a carcass weight basis?
Directions: Please answer the following questions and circle your answer clearly.
1. True or False: The cattle pricing method “Grid Pricing” uses a combination of dressed weight, quality grade and yield grade to determine the price of a carcass.

2. True or False: In “Live Pricing” cattle are typically individually priced.
3. When using the live pricing model who typically pays for shipping of the animals to a packer?
a. Buyer
b. Seller
c. A third Party

5. Which of the following is not a quality grade in cattle?
a. Prime
b. Choice
c. Average
d. Canner

Many teams also competed in the livestock quiz bowl contest. Similar to Jeopardy, participants compete in teams of four (a fifth can compete as an alternate) and buzz in to answer questions. Any member on the team can buzz. If they get the question wrong, the other team then gets a chance to answer the question. If everyone on the team answers at least one question, the team receives bonus points. After several dozen questions, points are tallied and a winner is declared. A champion is determined in a bracket system with the undefeated team named champion. While the fast-paced quiz bowl’s results are known immediately, others must wait until Saturday to see how they fared in the skillathon contest. 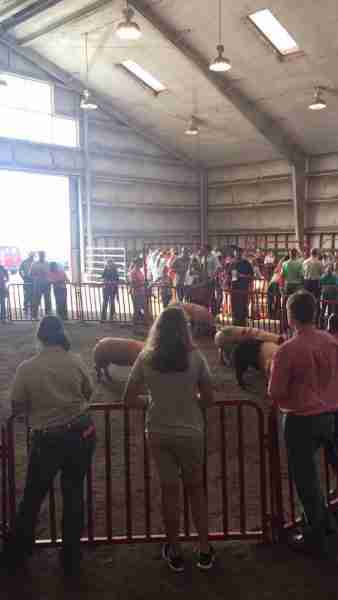 Friday dawned hot and humid like the day before. Tables of supplies were replaced with pens of animals. Youth were separated into groups and spread among the pens of sheep, goats, pigs and cattle. Time was called and everyone began studying their classes, taking notes and marking their final places on cards. After 15 minutes, groups would rotate to a new class until all rotations had been completed. Within the 15 minutes for every class, youth would look for the faults and grants, or breeding quality or market quality, of every animal and rank them one through four according to their qualities. Detailed notes were also taken so participants could later answer questions about the class or give reasons to a judge about their placing.

After all placing cards had been turned in, it was lunch time. Participants couldn’t breathe freely yet, though. They still had to defend some of their placings to a judge in something called reasons. So, they hunkered down and poured over their notes. While waiting for their turn to go before an official, youth prepared their reasons, mouthing it to themselves or pacing the floors giving a speech to an imaginary audience. When their contestant number was called, their head popped up and they walked towards the reasons room. With a somewhat accelerated heart rate, they began their reasons.

They continued their reasons with a description and explanation of why they placed one animal over another.

“I started the class with the most complete heifer. As she stood on the profile she was the longest bodied and deepest ribbed. Upon closer inspection, she showed a greater curvature to her forerib. Furthermore, she was the most structurally correct in the class. She showed and appropriate angle to her shoulder and placed her hind foot down with authority as she walked around the pen. I realize that 2 had a greater circumference of bone however this strength did not make up for her lack in frame size.”

After going through all animals, the youth would end their reasons with

Officials judged a set of reasons on a point basis, with 50 being the top score possible. After a contestant gave their allotted sets of reasons (seniors gave four sets and juniors gave two), youth could then breathe a sigh of relief and rest.

While the youth relaxed after their long days of competing, volunteers and N.C. State Cooperative Extension employees worked hard to grade tests, tally points and determine who the next day’s winners would be. With more than a hundred tests to grade and judging cards to record, the task was a large one. The contest wouldn’t be possible without these individuals who work behind the scenes. Their hard work and dedication made the next day a success.

Trading in their dusty jeans and boots for more professional attire, youth, coaches, parents, officials and volunteers met at the McKimmon Center on Saturday for an awards breakfast banquet. Here the winners were announced.

Quiz bowl awards were officially announced here, too. The winning junior quiz bowl team was Alamance County, and the senior team award went to Stanly County.
Finally, an award was given to one senior and one junior for the overall high individual. This was determined by averaging their scores in all the contests. The junior winner was Amelia Harris from Bladen County, and the senior winner was Weston Houck of Stanly County. 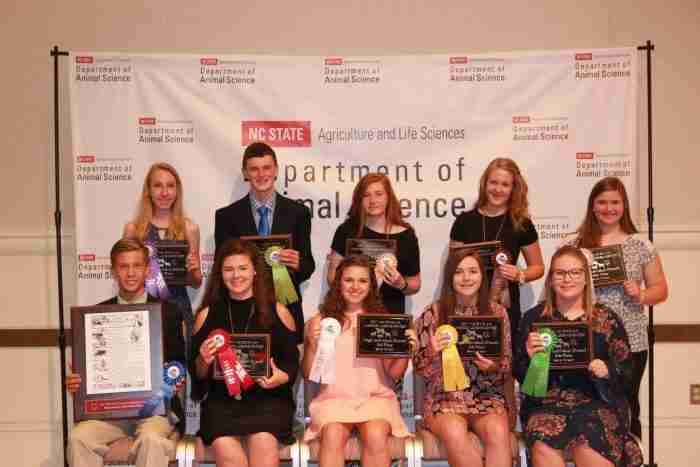 Seniors who made top 10 in skillathon and judging contests are eligible to try out for the state team that will represent North Carolina at nationals in the fall.

Seniors who made top 10 in skillathon and judging contests were eligible to try out for the state team that will represent North Carolina at nationals in the fall. The top senior quiz bowl team is eligible to represent the state at the national contest in Nebraska, too.

The state livestock judging, skillathon and quiz bowl contests are one of the ultimate livestock contests in North Carolina, only rivaled by the livestock shows at the N.C. State Fair. Months of work go into preparing for these contests. For some, the awards banquet brings the fulfillment of a goal and dream. For others, it leaves a bit of disappointment but a hunger to go out, practice more and come back the next year to sweat over livestock, tests and buzzers.

Congratulations to all participants and many thanks to volunteers, parents, coaches and Extension employees for making the contests such a success.