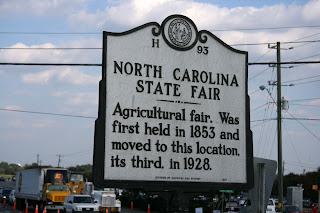 While we were all waiting patiently to cross the street the other day to get to our cars, Flying Bob looked up and noticed the date on the historical marker and realized that the Fair has a birthday this year. So, a few days later, I finally got around to doing a little digging and realized we are 80 years to the day of an important anniversary.

On this day in 1928, the first State Fair was held on this site as a state-owned entity, not owned and operated by the State Agricultural Society, which had disbanded and sold the old fairgrounds to cover its debts. 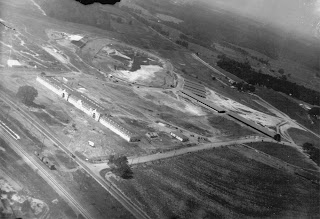 “On Monday, Oct. 22 (1928), Gov. and Mrs. Angus McLean and the red-coated North Carolina State College Marching Band led a parade of dignitaries, including the directors of each of the fair’s departments and their wives, through the main gate, and the state fair was back in business.” In his address to the opening day crowd of twenty thousand people, Governor McLean pointed out the fair now belonged to the people of the state and could succeed only with their support and cooperation. Significantly, he addressed the fair’s special role in showcasing to visitors the “experimental work of the State Department of Agriculture and the agricultural extension work of State College.”” From The North Carolina State Fair: The First 150 Years

The only building still standing today is the Commercial and Education Building, which was renovated in 1998. The fair became a division of the Department of Agriculture in 1937. 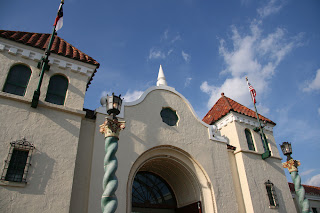