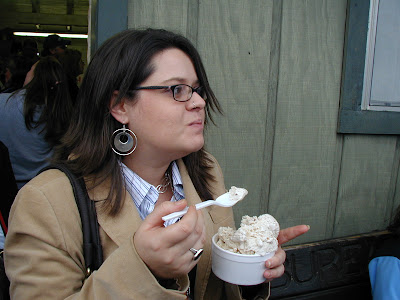 State student Amanda Parrish wolves down the Wolfpack ice cream.
This year we teamed up with students at N.C. State in the student public relations group to help promote the Fair on campus through sidewalk chalkings, info sessions, flyers and more. We also wanted to hear their experiences out at the Fair for a different perspective on the grounds. And where better to start than a topic most State students are very familiar with…the delicious ice cream from the NCSU Food Science department. Paul Jones stood in line with Amanda Parrish to get a taste of the sweet cream for $3 a scoop.

The State Fair is known for big things. Tractor pulls, roller coasters, turkey legs and gourds the size of small children. Everything at the fair is big, including my favorite part of the fair, the N.C. State ice cream. Mounds of homemade ice cream, piled on top of each other, crammed into a cup meant for lesser things. A sweet decadence suited for royalty, but given to the masses. As with everything else at the fair there is a line, but this ice cream is worth every minute of that arduous line.

As I waited in line, I thought about which flavor I would choose. Vanilla, Chocolate and Strawberry were my traditional favorites, but Cherry Vanilla sounded good too. And so did Butter Almond, Cookie Dough, Cookies and Cream, Chocolate Chip Mint, Pecan Crunch and Java Bean. OK, they all sounded good. After talking to several people in line, I decided on Butter Almond. I bought a cup instead of a cone and it was amazing. There was so much of it that I could hardly finish…..but I did anyway. I even become a short-time celebrity as I ate my ice cream with some friends. Complete strangers wanted to talk to me and find out what I was eating and where I got it from. As a State student, I was proud of my fellow Wolfpack and their delicious homemade ice cream.