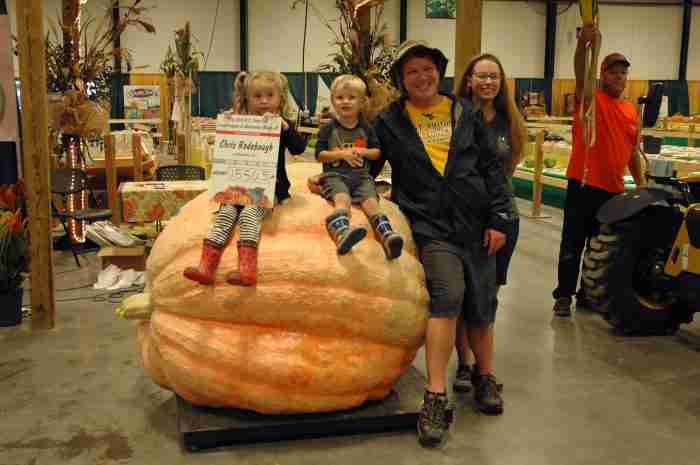 Editor’s note: A misprint was made on the original weigh-off sign shown in this photograph. The corrected sign is now on display with Chris Rodebaugh’s pumpkin.

Rodebaugh is a first-time grower, and gathered the information needed to grow his super-sized pumpkin from the internet. “I saw some entries into my local State Fair in West Virginia and thought, ‘that’s pretty neat.’ I thought I’d try to grow one myself,” he said. When asked if he’d return in 2019, he smiled broadly. “I’ll be back. I’m gonna go big next year. I’m gonna go obscene.” 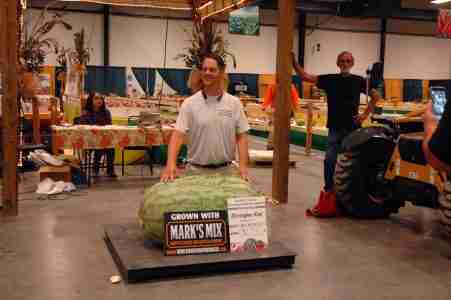 Christopher Kent has been growing mammoth fruit for years. He credits hard work and dedication for his success, and he’s a big fan of the Fair. “I love coming out to the N.C. State Fair,” he said. “It’s one of my favorite places to go. Y’all are just absolutely wonderful. Since you started the competition, I’ve been coming here. I can’t say enough for North Carolina.”

The second-place pumpkin, grown by Mark Rollins of Clyde, weighed in at 856 pounds. Third place went to Jean Nash of Tarboro with a pumpkin that weighed 444 pounds. Nash also took home the Howard Dill Award for the prettiest pumpkin.

The largest and second-largest watermelons were separated by fewer than five pounds. Hinzy Williams of Bailey took home second place with a watermelon weighing 260 pounds. Third place went to Larry Boyette of Kenly with a watermelon that weighed 255.5 pounds. 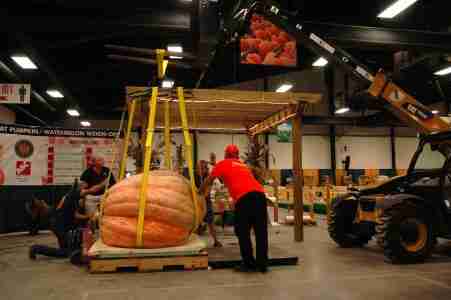 Entries have been getting larger each year. So much so, that contest officials were prepared for the mammoth fruit weigh-in. Special lifting rings were commissioned that could be sized to each pumpkin, allowing the fruits to be carried by a crane to the scale. This ensured that all weights could be appropriately measured, and no one would suffer a loss due to a dropped entry. Watermelons were carried to the scale by a team of contest officials.

This event is sanctioned by the Great Pumpkin Commonwealth, an international organization that promotes growing giant vegetables. For this competition, pumpkins are accepted from in-state and out-of-state growers. Pumpkins and watermelons must be grown and cared for by the exhibitor, and the exhibitor must be present at the weigh-in.

Fairgoers can view the giant pumpkins and watermelons in the Expo Center during the Fair.