Home 2017 N.C. State Fair Get your official weight at the fair — if you dare

Get your official weight at the fair — if you dare 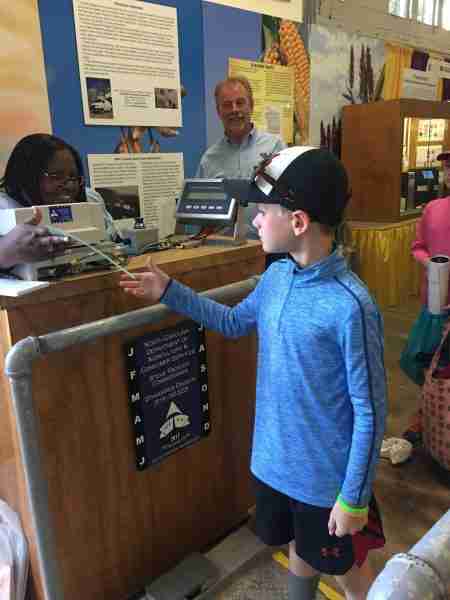 Glen Farmer is a heavy-scales inspector with the N.C. Department of Agriculture and Consumer Services. For a few shifts during the N.C. State Fair, he weighs something a little more fun — fair-goers. For the last 20 years, he has worked the Standards Division booth inside the Education Building near the House-Autry hush puppies.

“We have your official weight according the to State of North Carolina,” said Farmer. “A lot of folks just shake their heads when given their printout and try to tell us it’s not right. But it is!”

In North Carolina, anytime a scale is used to determine the price of an item, that scale should be inspected and certified by the Standards Division. Inspectors make sure scales are clean, level and, of course, accurate.

Farmer, along with Sharon Woodard, lab manager and longtime Standards Division employee, joke that the ratio of men to women getting weighed is significant. “The ratio is probably 95-to-1,” said Woodard. “We do have a little cover to put over the display for women who want their weight but don’t want everyone to see it.”

“I like to joke with women and tell them that it doesn’t matter if they cover it up,” said Farmer. “We have a video screen with their picture and their weight right outside the building.” Of course, Farmer is joking. But that doesn’t stop some real silliness in the booth.

“There was one woman that said she was going to have to remove her clothes,” he added. “I told her that was up to her, the only person she’d have to answer to is security.”

The Standards Division booth at the fair has been a tradition for many years. Some families make it a point to come by every year. 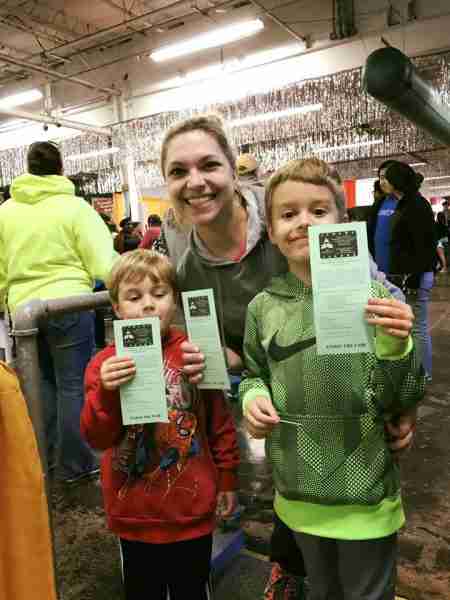 Getting weighed at the fair is a tradition for the Cornetti Family of Raleigh.

Melissa Cornetti of Raleigh came to this year’s fair with her two young sons. She has been coming to the fair and getting weighed at the Standards Division booth for 37 years, a tradition that started with her own parents. She brings her sons every year to the fair to be weighed. The first time was when she was pregnant. She has kept the printed slips every year for her children — mementos of growth and a snapshot of time.

Visitors to the booth can not only get a free print out of their weight, they can also learn a little about what Standards inspectors do at gas stations and retail stores. This year, visitors to the booth can learn a little about skimming devices that thieves have used to grab credit card numbers at gas pumps, including what the devices look like and how to protect yourself.

Inspectors check dispensers for the presence of these skimmers by request, complaint and during routine inspections. The division has recently launched an effort to get station owners and operators to also be involved in looking out for skimming devices.

The Standards Division booth is located in the Education building. Get yourself weighed between 9 a.m. and 9:45 p.m. If you plan on eating your way across the fair, stop by for a before and after weight.