Frenzy of a good time 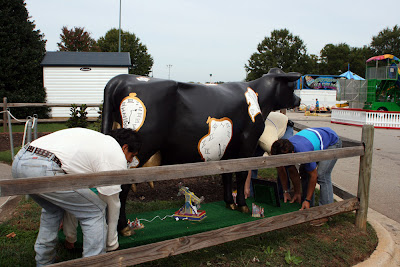 One thing I love about the Farm Animal Frenzy competition is the reaction from the crowd. Whether we are at the mall or at the fairgrounds, people are drawn to these animals.

All of the farm animals (19 total) were dropped off at the fairgrounds yesterday and getting them put in their proper places was number one on the list of things to do today. This is a time-consuming task that takes four or five people about four hours to complete.

Before we got started, all the animals were set in one place and there was a steady stream of people stopping by to check them out, take their photos with the animals, and generally give their opinions on the artistic and creative merit of each animal. (It probably didn’t hurt that they were all staged right outside of the area where people were dropping off entries for the Art and Photography competition). When we started moving the animals, it was quite a sight, and we caught lots of smiles from people as we drove through the fairgrounds. I laughed that we were like a parade float, so decided that this would be a great chance to debut our new gadget, a Flip Mino.

So, here’s a short video of one of our many parade floats today. The commentary and shaky camera are courtesy of me. Hopefully I’ll get a better grasp of video taking soon. Don’t forget to vote for your favorite farm animal. The winning school will get a gift certificate from Jerry’s Artarama. We’ll announce the winners on Monday afternoon, so stayed tuned! And a special thanks to Saturn of Cary, Saturn of Chapel Hill-Durham and Saturn of Raleigh for being this year’s sponsor!