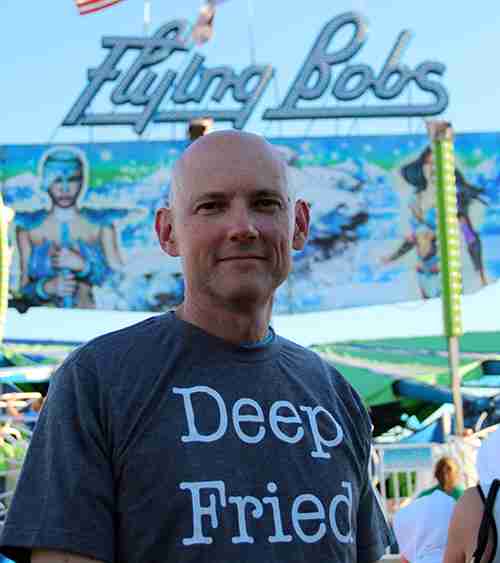 Brian Long, aka Flying Bob of the State Fair’s Deep Fried Crew, has spent the past 14 years as the fair’s chief spokesman.

For the past 14 years, I’ve been on one of the most thrilling public relations rides in North Carolina. As public affairs director for the N.C. Department of Agriculture and Consumer Services, I have had the opportunity to communicate with the public about a wide variety of topics. What I’ll remember most, though, is the work I’ve done each October, when the department puts on the annual N.C. State Fair. My office is responsible for publicizing the fair and helping the news media report on it. Over the years, I’ve talked about both the good and the bad associated with the fair. I’ve done early-morning interviews and late-night press conferences. I’ve been on the fairgrounds for numerous sunrises and even more sunsets.

This fair, my 14th, will be my last. I have accepted a position with another state agency, starting in November. Moving on from the ag department is a big change, for sure. And not just for me, but for my family, too. This is the only job my children have ever known me to have. My daughter was a toddler when I worked my first fair. My son attended for the first time when he was only 2 months old. I’ve always enjoyed seeing the fair through their eyes. As they’ve grown, they’ve graduated from carousels to the Alien Abduction, from being pushed in a stroller by their mom and me, to hanging out at the fair with friends. One thing that has remained constant in their fair-going experience: mini-donuts. We always get them. I was introduced to them by a coworker at my first fair. I introduced them to my family. We got hooked on them. And we still look forward to them every year.

The fair is a marathon of intensity. It is loud. It is exciting. It is exhausting. But when you work with great people, it’s a marathon worth running. I have been blessed to work with great people the past 14 years. My coworkers in the Public Affairs Division, and the ag department in general, pour so much of themselves into the fair each year. The cast of characters has changed over the years, but the teamwork has been constant. The Deep Fried Crew is amazing and I’m going to miss them immensely.

People have been asking me if I’ll miss the fair. Well, I’ll miss being a part of something so big. But I won’t miss the long hours, or the fact that I never really get to see the leaves change in October. At the beginning of the month, the leaves are green. By the time the fair is over and I’m able to see trees in daylight again, the leaves have changed colors.

Another question I keep getting: Will I come to the fair next year? I’m pretty sure I will. But not for all 11 days. And not for 10 to 14 hours a day. And if I have my choice, I’ll come on a weekday, when the fair is much less crowded. One thing that won’t change, though: I’ll still go buy a bag (or two) of mini-donuts.

To everyone who has made the past 14 years so memorable — the coworkers, the reporters and photographers, the millions of people who have visited the fair — I say thank you. It has been a great ride.