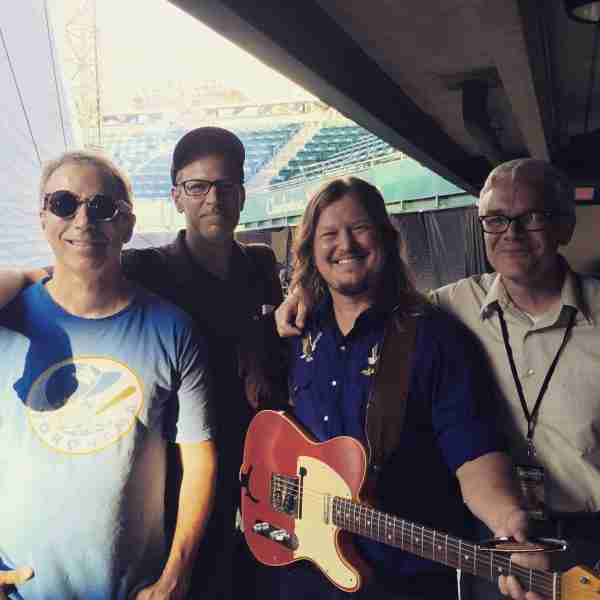 Greg Humphreys, second from right, will get together with the rest of Dillon Fence for an Oct. 21 show at the N.C. State Fair.

It’s a homecoming for the Winston-Salem native, who now calls Manhattan home. And it’s a reunion for Dillon Fence, which plays only a few shows a year.

Humphreys, the band’s singer and guitarist, will be getting together with Chris Goode (bass), Kent Alphin (guitar) and Scott Carle (drums). “We’re going to pull old fans out of the woodwork,” said Humphreys, speaking by phone recently from Abingdon, Va., a tour stop with Electric Trio, the band that takes up most of his time these days.

The origin of Dillon Fence is similar to that of many bands. When Humphreys was a teenager in Winston-Salem, two of North Carolina’s most well-known bands of the early 1980s — Let’s Active and the db’s — played at his high school’s Reynolds Auditorium. Both bands had Winston-Salem ties, and the fact that people from his hometown were making records “left a pretty big impression,” Humphreys said. He formed a band that played around town, but it broke up when the members went off to college.

While studying at UNC-Chapel Hill in the mid-’80s, Humphreys formed another band with high school buddy Goode and college friend Alphin. Like many bands before and after, Dillon Fence started out with one drummer, Brooke Pitts, who later left and was replaced by Carle.

It didn’t take long for Dillon Fence to develop a following through constant touring and by releasing albums such as “Rosemary,” “Outside In” and “Living Room Scene.”

The quartet drew comparisons to other power-pop bands of the late ’80s and early ’90s, including The Connells and Matthew Sweet. Humphreys doesn’t mind the comparisons … now.

“I think I was a little prickly about those kinds of things when I was younger,” he said, adding that age has given him a different perspective. “I was influenced by a lot of those groups, and hopefully, I influenced a few more along the way. We’re all being inspired by each other. That’s one of the great things about music.”

A bigger impact on Humphreys’ music came from his own home — his dad was a part-time musician who always played music around the house, and his mom was an artist. “(Dad) was my big musical influence,” Humphreys said. “(Mom) was always encouraging me to be creative.”

Today, Humphreys is passing along that influence to his own son, who is 3 1/2. “I usually leave an acoustic guitar or ukulele lying around the house,” he said. “I’ve got him strumming.”

Humphreys said he juggles music and family by “trying to fit more work into shorter bursts of time,” like the 10-day tour he was on with Electric Trio. It takes help from both his agent and his family. “We have to do some shuffling, but it’s been working so far,” he said.

Just as Humphreys focuses on Electric Trio, the other members of Dillon Fence have pursued additional interests and careers, too, giving the State Fair show what he calls a “reunion factor.”

What: Dillon Fence with Preesh!

Admission: Free with paid admission to the State Fair