So every year, members of the Deep Fried Crew try to do something on the fairgrounds that we have never done before. We take suggestions from our readers, but we also come up with some ideas on our own.

Last year, I decided to be a crafter in the Village of Yesteryear. I spent part of the day with Bill Williams and his wife Barbara caning a foot stool. Some of our longtime readers may remember the story.

After following a group of 4-H kids this summer as they prepared to show sheep at the State Fair, I was offered the opportunity to show a wool breed sheep in the open show. Joey Moore had 11 wool breed sheep to show, which meant he needed extra handlers to take the sheep into the ring.

“My” sheep was a Border Leicester breed named Helga. She was pretty cooperative — obviously an old pro in the show ring and happy enough to put up with an unseasoned handler, as long as she could keep an eye on her owner.

I got there a bit too early for the open shows. The sheep classes were among some of the largest in terms of numbers, so I should have expected that I needed to keep a flexible schedule.

As a former athlete, I have competed in events before, but I have never shown an animal in a livestock competition. I had to admit I was bit nervous.

What if Helga bolted? What if I tripped? What if I got asked a question about her? So many worries to sort through.

Joey and his mom Alesia assured me that Helga was a good girl and would be a champ in the show ring. She was certainly relaxed enough waiting to go into the show ring. When I arrived at the pen, she was laying in the bedding.

So much for worrying.

I quickly discovered my mistake and thankfully got myself in the right position before he approached Helga.

As we were lining up the sheep in the show ring, Joey whispers over to me that Helga is a Border Leicester sheep, she’s had two babies and she was shorn in the spring.  Now I had even more to focus on, but thankfully the judge didn’t ask me any questions.

The show itself went off without any other major hitches. Helga placed sixth, which was respectable. Thankfully, Joey’s ram finished seventh, so Helga could stay near her owner. We had gone into the show ring one behind the other, and we were leaving the same way. 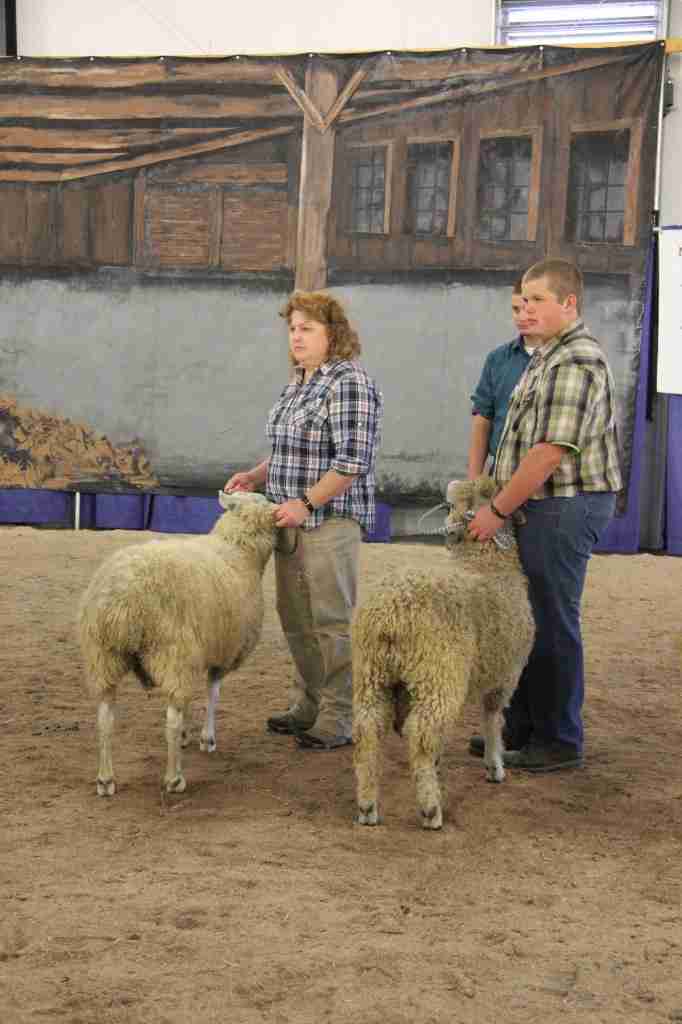 Merrie Go Round in the show ring with Helga the sheep and Joey Moore and his sheep.

Following the Franklin County 4-H kids through the summer was an absolute joy. Stepping into the show ring for the first time just like some of them had done earlier in the summer, made me better appreciate their efforts with their own sheep. I imagine that as a youngster, it is easy to feel overwhelmed by all the other competitors in the ring, by all the spectators and by all the activity that surrounds the show ring.

Next year when you attend a livestock show at the State Fair, particularly a junior show, give those kids a big round of applause. You can bet they have worked hard before they even stepped into the show ring.