Deep Fried Challenge: Trying something new that was really something old

Last year Firecracker issued the challenge to all of us in the State Fair Press Office to do something at the State Fair that we had never done before.

So, in my 14th year in the Press Office, my co-workers and I took target practice at the Raleigh Jaycees Turkey Shoot.  And I also tried my hand at tying tobacco, both skills I must admit I didn’t really master all that well.

We are continuing the challenge this year and are even including some reader-suggested ideas, including this one from Tuesday.

My challenge for this year was to experience a different aspect of the Fair besides working in the Press Office.  I decided to find out what it would be like to be a Village of Yesteryear crafter.

I like crafts, and the Village is one of my favorite places. Over the years I have bought many handmade items as mementos of the Fair.

So at around 3 p.m. I strolled into the Village to meet chair caner Bill Williams and his wife Barbara, who were kind enough to take me under their wings as an “apprentice.” Bill is a retired forester, who learned the craft from a friend.

I have never caned a chair or stool in  my life, but have often thought I’d like to learn. 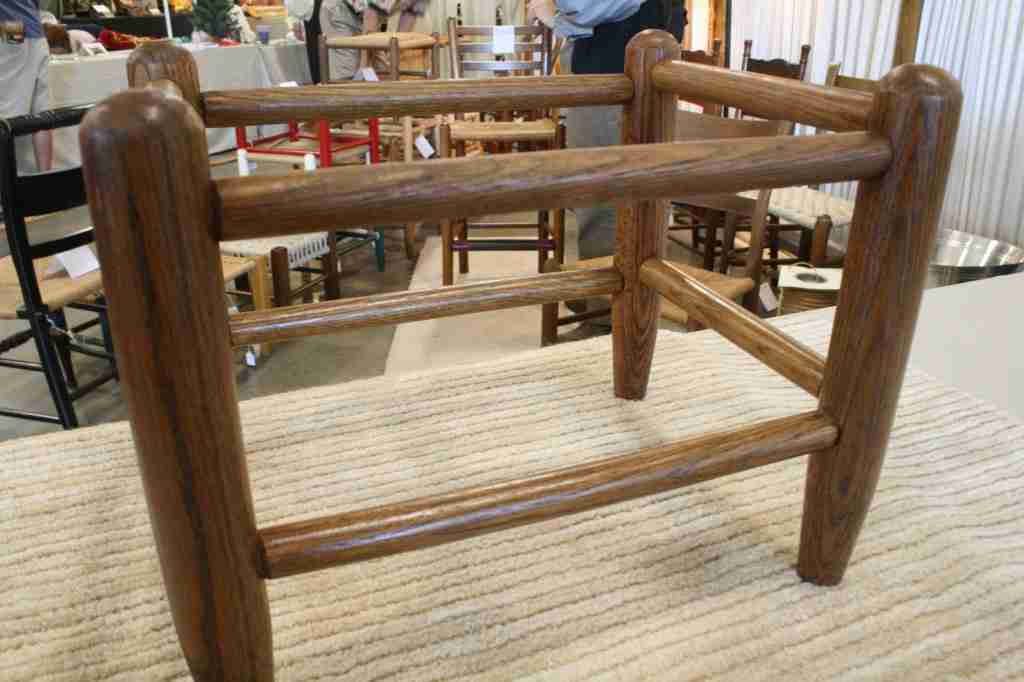 Pictured is the framework of the unfinished foot stool or the starting point of my project.

We work long hours in the press office, but rarely have I worked from 10 a.m. to 9:45 p.m., which are the hours of the Village exhibit. I ended up spending about five hours total in the booth. Nearly all of those hours were spent standing on my feet and hovered over a small foot stool that was my project.

During that time I worked to rush the foot stool, answer a few questions and learn that just about everyone has a cherished family seat at home that is missing a bottom.

The No.1 question Bill and his wife get asked usually starts with a statement. “I have this chair that was my grandmothers and it needs some work….”   Although the Clayton man is the resident chair caner in the Village, he does it as a hobby now and not a business.

The couple keep a pre-printed list of area contacts  that do repair chairs for people.  During the time I was in the Village, they handed out quite a few of the paper slips.

As Bill explained to me, what I was doing with the foot stool was actually rushing and not caning, because of the materials I was using. I used long strands of fiber rush, a product that has been used for around 80 years, and is basically tightly wrapped kraft-type paper.

With a few basic instructions, I was on my way. 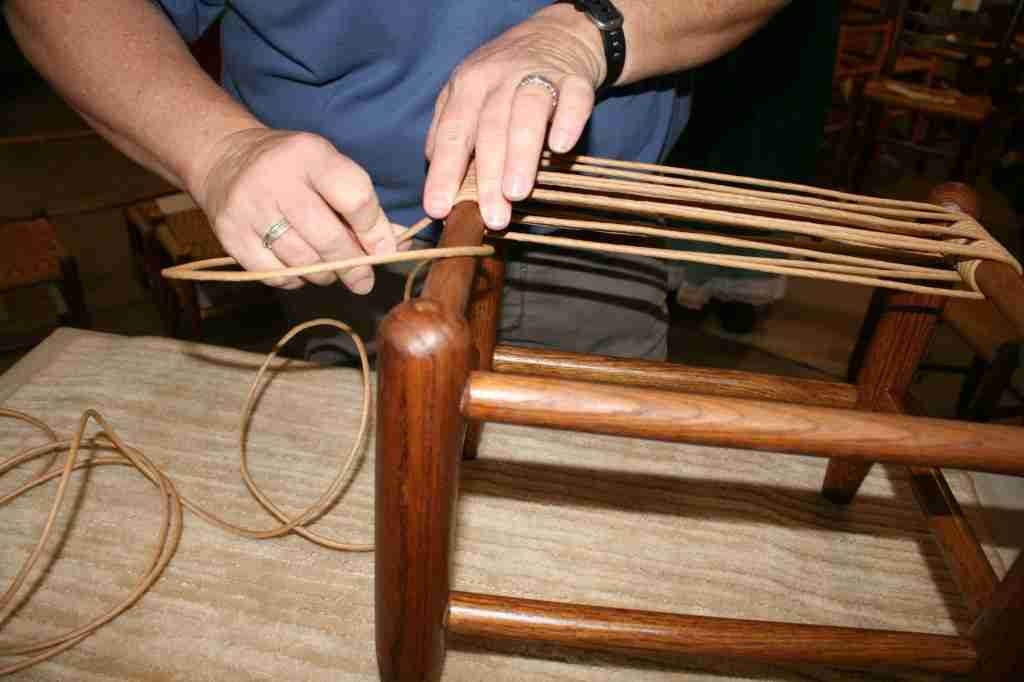 Merrie Go Round is hard at work rushing a foot stool.

It’s funny how I just made that sound easy, isn’t it?  The truth of the matter is, the basic pattern I was following was not super hard to grasp in concept, but it was hard, hard work. I welcomed the occasional break to give my tired and red fingers a break.

Thankfully, the motions were the same, but it took a great deal of time and focused attention. A few times I had to be gently reminded that I had miscounted. A few more times I wove the fiber rush under instead of over, which meant I had to pull out an entire row, but mostly I showed much better skill in crafting than I ever did in tobacco tying or target shooting.

I got high marks from the teacher, which made me proud. I was a little less proud when I found out he is able to rush a stool in about two hours. Even as a much faster and skilled crafter, this type of work is obviously a labor of love.

The Williamses have a number of chairs and stools for sale, each with a handcrafted seat. Some pieces are older stools that he’s picked up around, but others are more decorative styles made of tobacco sticks or hand-cut wood.

I can attest that with the amount of time and materials he has put into the chairs and stools, they are a good value.

One visitor asked if I was just learning. Something in my technique obviously gave me away. One visitor asked me how much I’d charge to do six chairs. At that point, I was about four hours into the process struggling to weave the final strands with tired, sore and red fingers.

All-in-all, the experience was thrilling. I’d easily say it was my best day ever at the State Fair. 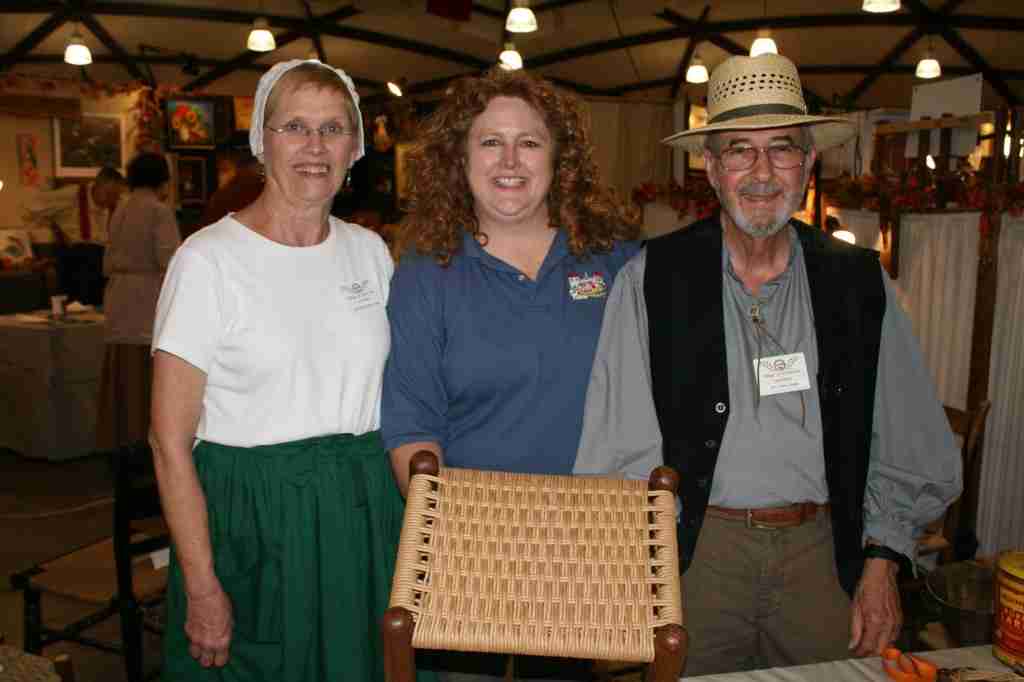 Merrie Go Round with the finished stool, along with Bill and Barbara Williams.